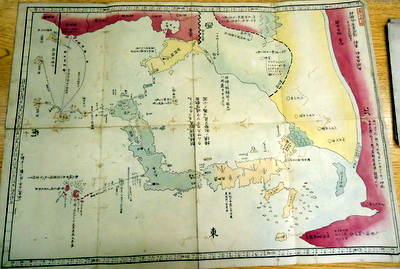 One of the maps from the Sangoku tsûran zusetsu, showing Ryûkyû, Taiwan, parts of China, Japan, the Korean peninsula, Ezo, and parts of Russia, with colors indicating national/cultural boundaries. Sakamaki-Hawley Collection, University of Hawaii Library.

Hayashi Shihei was a Rangaku scholar and physician in the service of Sendai han, known for his writings on a variety of domestic and foreign affairs matters. He was of no direct relation to the Hayashi clan of Confucian scholars in service to the shogunate.

Shihei's Sangoku Tsûran Zusetsu (Illustrated General Survey of Three Countries), completed in 1785, provides descriptions of Ezo, Korea, and Ryûkyû, the three lands nearest Japan. The text has been described as "the first attempt to define Japan's position in relation to its neighbors."[1] Maps included in the publication are perhaps the first to show the islands of Japan all in one color, and lands associated with other polities or cultures in other colors, implying a proto-national(ist) understanding of Japan as a single, unified, political or cultural entity.

In 1786, Shihei began composing a text, titled Kaikoku Heidan (Military Discussion of Maritime Nations). Inspired by the stories of the Hungarian Mauritius Augustus Count de Benyowsky, who landed on Amami Ôshima in 1771 and told of the great threat of Russian expansion, Shihei wrote of his concerns about Qing military strength, and the potential for China to once again attempt to invade Japan, as it had done under its previous barbarian dynasty.[2]

The Kaikoku Heidan was completed and published in 1791, and the following year, Shihei was placed under house arrest, and the printing blocks for his books Kaikoku Heidan and Sangoku Tsûran Zusetsu were seized and destroyed. Maps were seen by he shogunate as matters of national secrecy, and similarly, discussions of military matters were sometimes seen as fomenting political dissension, by criticizing the shogunate's foreign policy, or suggesting better ways to do things. Shihei's arrest may have also been spurred in part by critiques of his works made by Furukawa Koshôken to the rôjû Matsudaira Sadanobu.

He died the following year.

The shogunate reversed its ban on the publication of Kaikoku Heidan in 1856.[3]