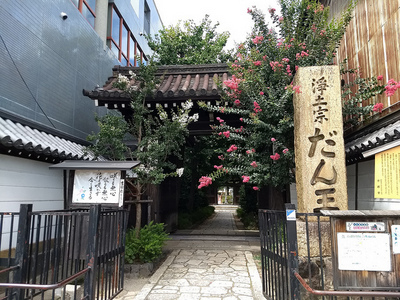 Dannôhôrin-ji is a Jôdo shû (Pure Land) Buddhist temple in Kyoto which claims to hold the oldest maneki neko (inviting cat) statue in the country.

A previous temple, Goshin-ji (悟真寺), was founded on the site in 1272 by the monk Bôseirô Ryôe, with the approval or support of Emperor Kameyama. Ryôe then taught the teachings of Hônen there, and made it a center for spreading the teachings of devotion to the nenbutsu. The temple survived for some time, but was destroyed and rebuilt in fires and other disasters a number of times, finally being destroyed in the 1550s or 1560s, and not rebuilt.

The monk Taichû, after introducing Pure Land Buddhism into the Ryûkyû Kingdom, returned to Kyoto in 1611 and made his retreat on the former site of the destroyed Goshin-ji, naming it Chôyô-zan Sendannô-in Mujôhôrin-ji. In 1619, Taichû passed the abbotship of the temple over to his disciple Dannô, and retired to a site near Higashiyama Gojô-zaka. Prior to his retirement, however, Taichû received a number of gifts from King Shô Nei of Ryûkyû which remain in the temple's collection today. These include a lacquerware chair in the Ryukyuan style, several other pieces of Ryûkyû lacquerware, an impression of a famous calligraphic inscription by Sima Guang, a painting of West Lake, and perhaps most significant, a portrait of Taichû by Shô Nei himself, inscribed too with calligraphy by the king himself. The objects gifted to the temple by the king also included a Ming brocade of a four-clawed dragon on a red background, which was then donated by the temple to be incorporated into the Kuronushi-yama float for the Gion Matsuri.

Under Dannô, the temple built a new hondô (Main Hall) to house a statue of Amida said to have been carved by Eshin. About a century later, in the 1730s or 1740s, the temple came to house the mortuary tablets of Tôfukumon-in (granddaughter of Tokugawa Ieyasu and empress consort of Emperor Go-Mizunoo). From that time forward, the temple was able to incorporate both the chrysanthemum crest of the Imperial household and the mitsuba aoi (three-leaf hollyhock) crest of the Tokugawa clan into its architecture or decor in certain limited ways.

A branch temple called Dannô betsuin Taichû-ji was established in Naha in 1937, destroyed in 1945, and rebuilt in 1972, on a site in the Oroku/Kakinohana neighborhood said to be the first place where Taichû introduced Ryûkyû nenbutsu.