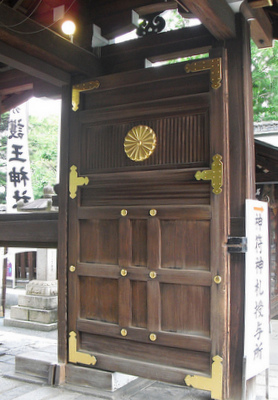 The chrysanthemum is the crest and symbol of the Japanese Imperial family, and as such, is one of the most elevated symbols in Japanese culture. Though it has had strong associations with the Imperial institution since the time of Emperor Go-Toba (r. 1183-1198), however, the sixteen-petaled chrysanthemum crest was only officially restricted to Imperial use in 1868/3.[1]

Its use as an auspicious symbol originates in China, where the flower is called jú, which is a close homophone for jiǔ, meaning nine; while nine is not itself a particularly auspicious number, the chrysanthemum blooms in the 9th month of the lunar calendar, and so is auspicious for matching up with its season in that way. The homophone connection carries over, albeit imperfectly, into Japanese, where the flower is called kiku, and the number nine is kyû or ku. In connection with this association, and because they were in bloom at that time, a Chrysanthemum Festival was traditionally held in China on the 9th day of the 9th month, since ancient times, and was later adopted elsewhere in East Asia.[2]

The chrysanthemum also appears in ancient Chinese legends, such as that of a boy who despite being a favorite of the emperor (or because of it) was driven into exile by his political rivals; he drank, however, from dew which had gathered on chrysanthemums, and gained incredible longevity, surviving another 700 years. This story is celebrated in the kikusui-hoko ("chrysanthemum water float") parade float of the Gion Matsuri in Kyoto.

Due to the Imperial association, the chrysanthemum is found in numerous places associated with the Imperial family, including on the main gates at Yasukuni Shrine, and on a set of silverware given by the Meiji Emperor to Gen. Ulysses S. Grant, as well as in other esteemed contexts; for example, the Tokugawa shogun's Honmaru palace at Edo castle included a kiku no ma, or "chrysanthemum room." Further, the position of Emperor is sometimes referred to as the "Chrysanthemum throne," at least in English. The Order of the Chrysanthemum, established in the Meiji period, remains today the highest order the Emperor, or the State of Japan, grants.[3]