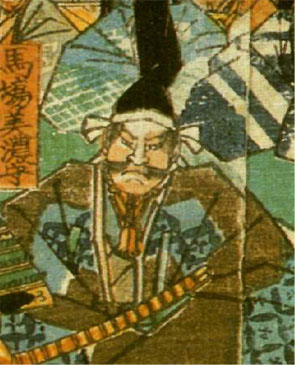 Nobufusa was the son of Kyôraishi Nobuyasu (教来石信保) and eventually succeeded Baba Torasada, the latter having been killed by Takeda Nobutora. He was at first known as Kyôraishi Kagemasa. He served three generations of Takeda daimyô – Nobutora, Shingen, and Katsuyori.

Nobufusa was present at many of Shingen's battles, going back to his earliest, under Nobutora. He supported Shingen in his 1541 coup that saw Nobutora exiled from Kai and in 1546 was named samurai-taisho (侍大将) and at this time changed his name to Baba Nobufusa and recieved the title of Minbu no shô.

He was part of the miscarried night attack on the Uesugi at the 4th Battle of Kawanakajima, fought at Odawara and Mimasetoge in 1569, and was in the lead at the Battle of Mikatagahara in 1572. He was awarded Fukashi Castle in Shinano in 1550, and inherited the title of Mino no kami after Hara Toratane died in 1564 and changed his name to Nobuharu.

Nobufusa fell out of favor somewhat with Takeda Katsuyori, but, despite personal objections, led his men in a charge against Oda Nobunaga's left at the Battle of Nagashino on 29 June 1575. Nobuharu survived the morning's slaughter (in which many of the veteran Takeda retainers were slain) and protected Katsuyori's retreat across the Kansagawa. Nobuharu then turned with his remaining troops and was cut down by the enemy.

After the death of his son Masafusa in 1582, Nobufusa's lands went to his younger brother Nobuyori.

According to the Koyo Gunkan, Nobuharu was consulted by Shingen on many important matters and was supposed to have suggested the strategy that Shingen used to win the Battle of Mimasetoge. Prior to Nagashino, he is reputed to have fought in 70 engagements while suffering barely a scratch. He figures as one of the better-known members of Takeda Shingen's '24 Generals'.