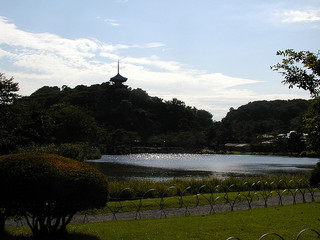 The pond at Sankeien, with the pagoda visible in the distance.

Sankeien is a Japanese garden in Yokohama, built by silk magnate Hara Tomitarô. It contains many historic buildings moved there by Hara, including the oldest extant pagoda in the Kantô region. Many of these buildings are officially designated Important Cultural Properties.

Ôjaku was also the name of a court lady of the late Heian period who appears in the Heike Monogatari, and who was in love with the courtier Saitô Tokiyori. When he refused her advances, and left court to be away from her, entering a monastery, she took the tonsure as well in order to follow him.