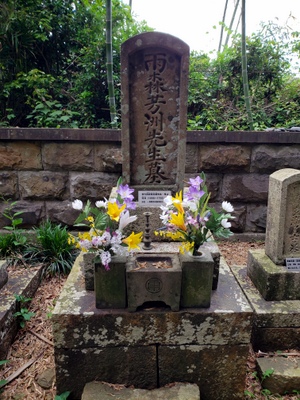 Amenomori Hôshû was a prominent Confucian advisor to the lords of Tsushima han.

Originally from Ômi province, he began studying under Kinoshita Jun'an at the age of 18 before later entering the service of Tsushima. At the age of 22, he was recommended by Jun'an to enter the service of that domain, and took up a position at the Tsushima mansion in Edo. Three years later, he was sent by the domain to Nagasaki, where he was to study Chinese. He then traveled to Tsushima at age 26, where he was provided with a residence and a stipend of 200 koku, remaining there in service to the domain for many years.[1]

Hôshû also later traveled to Pusan numerous times, where he studied Korean.[2] One such sojourn in Korea took place in 1712, following the death of Shogun Tokugawa Ienobu. The Korean court dispatched a formal embassy expressing condolences, and Amenomori then spent ten days in Pusan as head of a mission formally expressing gratitude for those condolences; while there, he compiled a volume of notes and thoughts on the character of Korean culture, and its fundamental differences from that of Tokugawa Japan.[3]

In the early years of the 18th century, shogunal advisor Arai Hakuseki, a fellow student of Jun'an, sought to revise much of the protocols and practices used in diplomatic exchanges with Korea. These included abandoning the term taikun ("Great Prince") to refer to the shogun, and the adoption instead of Nihon kokuô ("King of Japan"), a term explicitly rejected by Hayashi Razan in 1635. Amenomori opposed these changes, in part due to his experience (which Hakuseki lacked) in the actual practicalities of negotiation and compromise with the Korean court.[4] In the end, however, his opposition was unsuccessful.[5]

At the age of 57, he was among the extensive Tsushima entourage which escorted the 1711 Korean embassy to Edo. He is seen in numerous paintings and prints depicting the street processions or other aspects of that embassy mission.[5] He served as an interpreter for the 1719 mission to Edo as well.[2]

Throughout much of his career, from the 1690s until as late as the 1740s, Amenomori argued forcefully in support of the importance of Tsushima's trade and diplomatic relations with Korea, fighting for concessions or aid from the shogunate to help support the continuation of these relations. One example of this is seen in 1695, when a severe debasement of the currency by the shogunate damaged Tsushima's ability to offer tribute (or pay for Korean goods) in sufficiently high-quality silver. This problem deepened when a decrease in Korean production of ginseng caused prices of that precious commodity to double. In the end, though, as the result of memorials to the rôjû penned by Amenomori and others, in 1711 the shogunate granted Tsushima special permission to use 80% silver ingots, rather than the further debased ones now standard throughout the realm.[6] Amenomori also argued for the importance of Tsushima's activities for the intelligence information it brought in, via Korea, about events and developments in the outside world; he compared this to loyal service in coastal defense. As a result, after much memorializing, in 1748 the shogunate finally granted Tsushima exemption from obligations to contribute men or materiel to the defense of the port of Nagasaki. In 1753, however, towards the very end of his life, while he may have still been supportive of continued trade relations, Amenomori suggested or supported terminating the practice of sending Korean embassies to Edo. He cited that the missions were too expensive, for the Korean court and various Japanese parties alike, and that they were "not of great benefit to the Japanese realm."[7]

His writings include Kôrin teisei ("Sober Advice on Relations with Korea," 1728) and Rinkô shimatsu monogatari ("Collections on Affairs with the Neighbor," 1731), two works in which he discusses the devastation visited upon Korea by Toyotomi Hideyoshi's invasions, the lack of honor in initiating the invasions, and the complete lack of victory or benefit for Japan. In short, having led such a career in negotiating with the Korean court, he had some sympathy for their experience, and their situation.[8]

A memorial hall and library dedicated to him, called Hôshû Shoin, operates today in Amenomori's hometown in Shiga prefecture.