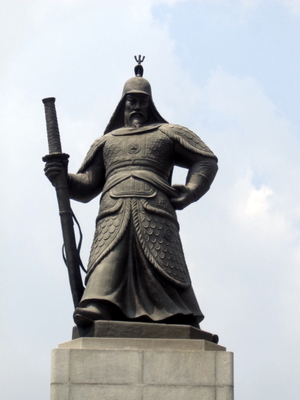 Yi Sun-shin was admiral of the Joseon Korean navy in the 1590s, and is celebrated as one of Korea's greatest national heroes for his role in repelling Toyotomi Hideyoshi's invasions of Korea.

Yi tried out for a position in the military in 1572 but fell off his horse and failed the exam. Trying again in 1576, however, he passed and was appointed as a chief in the Northern Frontier Army in Hamgyeong-do. Three years later, in 1579, he became an officer in the Military Training Center and then a staff captain to the Army Commander in Chungcheong.

Yi joined the navy in 1580 and was appointed commander of the Left Jeolla-do Naval District. After being falsely accused of desertion, however, he was forced to leave the navy and returned to being an officer in the Military Training Center in 1582. His father passed away the following year, and Yi left the military to enter into a three-year formal period of mourning.

Yi returned to the military in 1586 as an officer in Hamgyeong-do, contributing to a campaign against the Jurchens. Despite some successes, however, defeats in surprise attacks by the Jurchens were blamed on his errors or failures in leadership, and Yi was stripped of his post and rank again in 1587. Despite losing his position as commander, he continued to serve for several months as a rank-and-file soldier. He was then pardoned the following year following certain victories against the Jurchens, and quickly rose through the ranks again, being appointed to several different official posts in 1589-1591 (including serving as magistrate of Jindo) before returning to a commanding position in the navy by 1592.

Samurai forces landed at Pusan in 1592/4, moving on to Seoul in the 5th month and Pyongyang in the 6th month. Almost immediately after their first landing, Yi began to enforce the strengthening of coastal defenses, overseeing the repair of numerous ships and weapons and the construction of large iron chains to block invaders from harbors or inlets. Over the ensuing months, Yi then led the Korean navy in a number of decisive victories against the samurai forces, beginning with the sinking of some 40 Japanese ships at Okpo, Happo, and Jeokjinpo on 5/7-5/8. Several weeks later (5/29-6/10), he led his navy in sinking some 70 Japanese ships at Sacheon, Dangpo, Danghanpo, and Yulpo. The following month saw further decisive victories for Yi and the Korean navy, including the destruction of 59 ships at the battle of Hansando on 7/8 and victory again two days later at Angolpo. The battle of Busanpo on 8/24-9/2 brought yet another crushing defeat for the Japanese forces, who lost 130 ships to Yi's turtle ships. Yi led seven more attacks on the Japanese navy in the 2nd and 3rd months of 1593, and on 1593/8/15 was named commander of the naval forces of the three southern provinces.

Yi is celebrated in Korea for his strategic or tactical genius, but the technologies employed in these battles also feature prominently, and include highly-armored turtle ships, and various forms of cannon. In addition to merely winning victories, Yi succeeded in cutting off Japanese supply lines in the waters on the western side of the Korean peninsula, and simultaneously protecting the Ming Chinese/Korean supply lines.[1] Throughout the war, for seven years, Yi kept a war diary, entitled Nanjung ilgi (亂中日記). He is also known for a number of other writings, including a review or response to the History of the Song, entitled "Reading the Song History" (読宋史, K: Doksongsa).

Despite his prominent role in defeating the first Japanese invasion in 1592-1593, Yi was stripped of his post as commander of the three provinces and imprisoned on 1597/2/26 after defying his superiors' orders to launch attacks on Katô Kiyomasa, who he suspected was luring the Koreans into a trap. Yi was released roughly one month later, on 4/1, and learned of the death of his mother shortly afterward, on 4/13.

By 8/3, he was reappointed to his post as naval commander of the three provinces on 8/3. He then led a small group of some 16 ships to victory against a fleet of 133 Japanese vessels in the battle of Myeongnyang on 9/16. Yi's third son Myeon died in the 10th month of that year.

The following year, Yi gained aid from the Ming navy in pushing back the Japanese advance. The battle of Jeolido on 1598/7/24 saw a notable defeat for the Japanese.

Yi was killed in battle at Noryang on 1598/11/18, struck by a gunshot from an enemy ship, but encouraged his men to not let news of his death spread; his death was kept secret for a time, thus keeping Korean morale high. Some 200 Japanese ships were sunk before the battle ended.