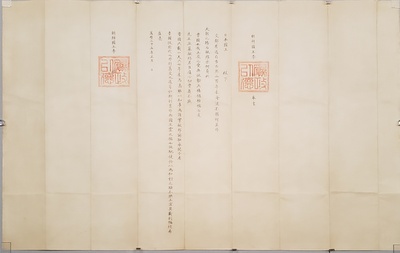 A fake letter from the King of Korea to the "King of Japan," forged by Tsushima han, 1607. Kyoto University Museum. Replica on display at the Tsushima Museum. Important Cultural Property.

The Yanagawa Affair was a scandal in which Tsushima han was found to have forged diplomatic documents. Karô Yanagawa Shigeoki, seeking to see lord of Tsushima Sô Yoshinari punished, brought these forgeries to the attention of the Tokugawa shogunate; in the end, however, Shogun Tokugawa Iemitsu judged that Yoshinari and the Sô clan would not be punished, that they would retain their special position in facilitating relations with Joseon Korea, and that Shigeoki would be exiled to Tsugaru. 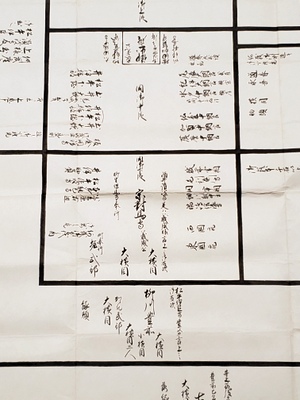 Seating chart for the shogunal audience to address the Yanagawa Affair, 1635/3/11. Detail. Nagasaki Prefectural Research Center for the History of Tsushima. Important Cultural Property. Replica on display at the Tsushima Museum.

In a grand audience held at Edo castle on 1635/3/11, Shogun Tokugawa Iemitsu determined he would not punish the Sô clan, and would allow them to retain their special position in facilitating relations with Korea. Yanagawa was exiled to Tsugaru. A system was then established in which monks from the Kyoto Gozan ("Five Mountains") Zen temples would be accredited by the shogunate as experts at diplomacy and dispatched to the Iteian temple on Tsushima to oversee the creation of diplomatic documents and other matters.