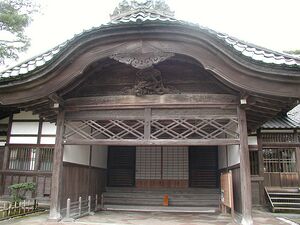 The entrance to the Tsuda Genba residence, as it stands in Kenrokuen today.

Tsuda Genba was a prominent Maeda clan retainer in 17th century Kanazawa. A buke yashiki (samurai residence) associated with him can be seen today in Kenrokuen, just outside Kanazawa castle.

The Tsuda residence was originally established inside the walls of Kanazawa castle, along with those of other high-ranking retainers, around 1600. While many other retainers moved out of the castle grounds in the 1610s, or following a fire in 1635, Tsuda Genba remained within the castle grounds until the 1660s.

He served as wakadoshiyori and as head of the firefighting corps before becoming karô. However, when there was a large fire in the city in 1690 and Tsuda was out hunting with his falcons, he was dismissed from his post.

Tsuda reentered the service of the Maeda thirty years later, becoming karô once again, and being assigned as well to see to the upbringing of the daimyo's successor. He and his descendants were one of only twelve samurai families under the Maeda to have an income of 10,000 koku or more. He died at the age of 74 in 1724.

The residence, destroyed in a fire in the Hôreki era and rebuilt in 1759, was used as a medical school beginning in the 1870s, and was moved from Ôtemachi to Kenrokuen in 1923, where it remains today. The interiors have been restored, but the genkan, or entrance area, remains much the way it was originally. The house was declared a Tangible Cultural Asset by the prefecture in 1989.