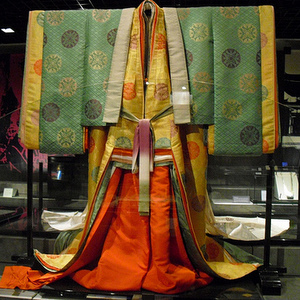 A jûnihitoe (twelve-layered court lady's kimono) on display at the Museum of Kyoto.

Japan has a great variety of textile traditions, ranging across the entire archipelago, and including not only Japanese textile arts, but those of the Ryukyu Islands and of the Ainu people as well.

Kyoto's Nishijin district has long been considered the center of Japan's textile arts, or at least of the finest and most highly regarded textiles most closely associated with the Imperial Court, courtier families (kuge) and court taste. During the Edo period, a number of families based in Nishijin consolidated their control over the entire process of textile production, from the silkworm farms outside the city, to spinning and dyeing of the threads, to the weaving and embroidering in Nishijin, to the wholesale and retail sales of the completed textiles. Today, the finest traditional-style textiles are still in high demand among the geisha communities and practitioners of traditional performing arts, among others, and the same set of families, for the most part, retain control over Nishijin's textile production and supply.

Japanese silk production first appears in Western records in 1859. In that year, Italy is said to have been producing five times as much raw silk as Japan, and China ten times as much. Japan's production expanded quickly, however, growing five-fold by 1862. Fifty years later, in 1912, Japan was the top exporter of silk in the world, and by 1938, roughly four-fifths of world silk production was controlled by Japan. In total, roughly half of Japanese exports in the Meiji period were textiles or textile-related products.[1]

Following the Meiji Restoration, the merchants of Nishijin, along with many in other parts of the country, while continuing to produce traditional garments in traditional styles, began to make use of Western/modern techniques, equipment (e.g. new types of looms), and new dyes and materials, adapting these to their needs. At the same time, they experimented with new styles and products that might meet shifts in Japanese demand, and that might appeal to foreign markets. Some prominent weavers, dyers, and others traveled to Europe, bringing back new equipment, techniques, materials, and ideas, and incorporating these into their traditional practice.[1]