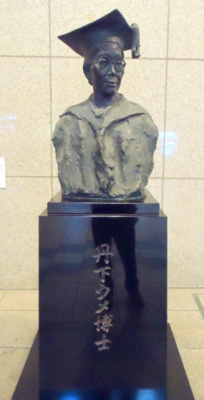 Tange Umeko was the first woman to attend a Japanese Imperial University, and the first Japanese woman to earn a Doctorate of Science from a US-based university.

Born in Kagoshima in 1873, Tange lost vision in one of her eyes at a very young age. She attended Kagoshima Normal School and graduated at the top of her class, after which she became a teacher at Meizan Elementary School in Kagoshima. At age 28, she entered Japan Women's University (Nihon joshi daigaku), and after turning 40, she became the first woman to attend Tôhoku Imperial University. She later traveled to the United States, where she studied at four different universities over a nine year period, and became the first Japanese woman to earn a doctorate of science in the United States.

After returning to Japan, Tange became a professor at Japan Women's University, and published numerous research papers on nutrition science, before retiring at age 78.