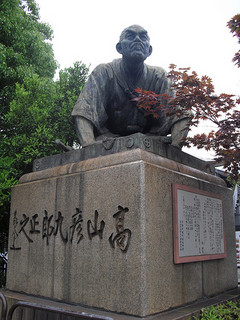 Statue of Takayama Hikokurô at Sanjô-Kawabata, in Kyoto, bowing in the direction of the Kyoto Imperial Palace.

Takayama Hikokurô was a samurai of the mid-Edo period known for his travels across the country, and for his strong sentiment of loyalty to the Emperor. Along with Hayashi Shihei and Gamô Kunpei, he was known as one of the "three eccentrics of the Kansei era."

Hikokurô was born in Kôzuke province, and studied under Kôno Josai in Kyoto. It is said that when he arrived in Kyoto in the 1760s, seeing the state that the Kyoto Imperial Palace had fallen into, he bowed deeply towards the palace, and otherwise expressed his deep sense of Imperial loyalty. It is believed he may have been involved in attempts to re-establish the Daigaku-ryô ("Imperial Academy"), and perhaps was even an early advocate of the restoration of Imperial rule, long before the sonnô jôi movement of the 1850s-60s.

Hikokurô later traveled around the country, crossing paths with figures such as Fujita Yûkoku, Tachibana Nankei and Nakayama Naruchika, but while traveling in Kyushu, he became the object of an investigation by shogunate authorities; this ended in his suicide, on 1793/6/27, in Kurume (in Fukuoka han). His travel diary is a prominent, oft-cited/studied example of Edo period travel writing.