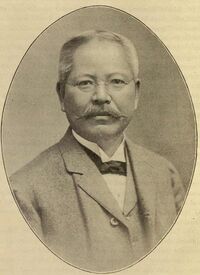 Takamine Jôkichi was a prominent physician and scientist of the Meiji period. Originally from Kaga han, he spent much of his later life in New York City. He is best known for developing methods to isolate or produce a number of substances, including adrenaline, Taka-diastase (a digestive aid and dyspepsia cure), an artificial fertilizer, and a fermenting agent.

Takamine was born in Takaoka, the son of Takamine Seiichi, a court physician to the Maeda clan lords of Kaga han; his mother Yukiko came from a family of saké brewers. He spent most of his childhood in Kanazawa, but at the age of 12 was selected to travel to Nagasaki to study.

He enrolled in Osaka Medical School at the age of 16, and transferred to Tokyo University at the age of 18, where he studied applied chemistry, graduating in 1878. The following year, he traveled overseas to study at the University of Glasgow, again on government scholarship, returning to Japan in 1881, where he became employed by the Ministry of Agriculture and Commerce as a researcher into commercial chemistry, focusing particularly upon indigo dyeing and saké brewing.

Takamine stayed for a time in New Orleans, where he represented Japan at the 1884 World's Fair. While there, he rented an apartment from a former Confederate officer whose daughter he would later marry, and befriended the writer Lafcadio Hearn, who had yet to travel to Japan.

After proposing to Caroline Hitch, his landlord's daughter, and promising to return to marry her once he was more financially established, he returned to Japan having developed a form of artificial fertilizer. Resigning from his government position, he entered into a business partnership with Baron Shibusawa Eiichi and Masuda Takashi, forming the Tokyo Artificial Fertilizer Company. While traveling abroad the following year in order to purchase equipment for the company, he studied American and European brewing methods, obtained patents from several Western governments for the processes of brewing saké, and married Caroline on August 10, 1887. They had two sons, Jôkichi Jr. (b. 1888), and Eben (b. 1890).

Takamine and his family traveled the US briefly and then moved to Japan, where Takamine could help run the Artificial Fertilizer Company. However, life in Japan did not suit Caroline, who also was disliked by Takamine's mother, and so the family returned to the US in 1890, establishing themselves for a time in Peoria and Chicago. There, he further researched and experimented with brewing methods, discovering a method of obtaining ferment from wheat bran waste. This new source of fermentation was purer and more powerful than the malt which had until then been used in the West, or the koji traditionally used in Japan. The Takamine Ferment Company was soon founded to produce and distribute this product.

The Ferment Company was destroyed in a fire shortly afterwards, however, and though rebuilt, ultimately folded due to pressure from the Whisky Trust and competitors in the liquor industry who feared that Takamine's fermentation source would render their malt totally obsolete. The entire affair, combined with surgery and medical bills resulting from Takamine being diagnosed with an acute liver disease, dealt a powerful blow to the family's finances.

Abandoning pursuits in the liquor business, Takamine returned to research, and discovered a substance which has since come to be called Taka-diastase, derived from koji. The official scientific name for the substance, as well as the name under which it was marketed, takes the 'Taka' in Taka-diastase from 'Takamine'. It serves as a digestive aid and dyspepsia cure. This discovery allowed Takamine and his family to become financially stable once more; the family moved to New York City, where Takamine established an independent laboratory.

In 1901, Takamine discovered a method for isolating and producing adrenaline from the glands of sheep and oxen. This would prove his most important and significant discovery, as no European or American scientist had yet produced the chemical in a pure crystalline salt form. The substance was quickly adopted by the medical community for its many beneficial uses, earning Takamine considerable wealth and fame. He was conferred the Order of the Rising Sun, Fourth Class, and the pharmaceutical company with which he worked received an Imperial gift of fifteen sakura trees.

While Takamine remained in New York and continued to pursue research, the Fertilizer Company he had established in Japan remained strong, and associates of his restarted the Ferment Company, in Japan. He made use of his great wealth and fame, obtained both through his companies and through investments, to work for equal rights for Asians, among other causes. Like many other prominent Japanese in the US at this time, he made a point of dressing in kimono on certain occasions, and speaking about Japanese culture, in order to expand awareness, understanding and appreciation among American society.

He played a role in founding both the Nippon Club and Japan Society (New York), and in organizing the now-famous gift of cherry trees from the Mayor of Tokyo to the city of Washington DC.

Takamine's home in Kanazawa can be found on the grounds of Kanazawa castle, and is open for visitors. One of his Japanese-style homes, called "Sho-fu-den" and located in Merriewold, in Upstate New York, is still extant and is maintained as a historic home. Takamine is buried in Woodlawn Cemetery, in the Bronx, New York City.