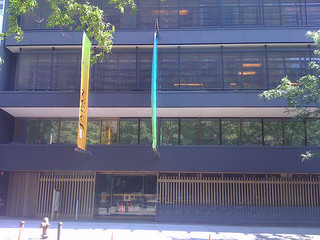 Japan Society is a not-for-profit organization based in New York City, and dedicated, according to its original 1907 rules of organization, to "the promotion of friendly relations between the United States and Japan and the diffusion among the American people of a more accurate knowledge of the people of Japan, their aims, ideals, arts, sciences, industries and economic conditions."[1] Today, the Society offers numerous public programs, including gallery exhibitions, film screenings, talks and lectures, concerts and performances, educational events, and Japanese language classes, while remaining active in the sphere of US-Japan corporate and diplomatic relations. Over the more than a century of its existence, the Society has worked with numerous very prominent individuals, from HIH the Shôwa Emperor, Henry Kissinger, and former US President Bill Clinton, to countless prominent Japanese artists, film directors and actors, and scholars.

Japan Society got its start at a formal reception dinner at the Hotel Astor arranged by the City of New York for General Baron Kuroki Tamemoto, a hero of the Russo-Japanese War, who visited New York in May 1907 along with another veteran of that war, Vice-Admiral Ijuin Gorô. The reception committee was chaired by local New York lawyer Lindsay Russell. The Society was formally established at that dinner, its 100 founding members including such prominent figures as philanthropist Jacob Schiff, August Belmont (grandson of Commodore Matthew Perry), physician Takamine Jôkichi, silk trader Arai Ryôichirô, Consul General Koike Chôzô, bankers Ichinomiya Reitarô and Ono Eijirô, and Fukui Kikusaburô, the head of Mitsui's New York branch. Other prominent individuals joined soon afterwards, including Prime Minister Yamamoto Gonnohyôe, banker Felix Warburg, and railroad magnate E.H. Harriman.

The Society originally had no headquarters, and had most of its events hosted at the Hotel Astor or the Metropolitan Museum of Art. Though originally the Society devoted itself primarily to merely social affairs welcoming Japanese dignitaries, in 1910 it began to host lectures and other events concerning Japanese arts and literature. The first President of the Society was John Finley, President of City College. Lindsay Russell, who had chaired the committee which organized that initial reception for General Kuroki, served as President of the Society from 1910-1919. Dignitaries honored in New York by the Society in these early years included Tokugawa Iesato (head of the Tokugawa clan following the Meiji Restoration), Prince Fushimi Hiroyasu and his Princess, and Tokyo Mayor Ozaki Yukio. The Society held its first art exhibition, an exhibit of ukiyo-e prints, in 1911, and published its first book, also on ukiyo-e prints, two years later. The Society's first film screening would be held in 1922, when footage of Crown Prince Hirohito's 1921 trip to Europe was shown.

The Society acquired its first headquarters in 1913, at 165 Broadway, and became formally incorporated as an organization. The previous year, it had funded the construction of a Japanese teahouse on the roof of the Hotel Astor, where the Society organized tea ceremony, ikebana shows, and the like. In these early years, the Society also organized travel tours to Japan, and published several regular publications on US-Japan developments. Following his departure as President of the Society, Lindsay Russell helped create an endowment in the name of Townsend Harris, which was dedicated to funding efforts to educate Americans about Japan.

Following the 1923 Great Kantô Earthquake which devastated Tokyo, Yokohama, and the surrounding regions, the Society organized a relief fund, collecting over $100,000 in contributions.

As US-Japan relations broke down with the development of Japanese military expansion into China beginning in 1931, Japan Society's popularity and prosperity declined dramatically. Following the December 1941 attack on Pearl Harbor, the Society's president, Henry W. Taft (brother to former US President William H. Taft), who had served in that position since 1923, resigned; numerous other prominent supporters of the Society joined him in departing.

The Society was forced to suspend its activities, though it continued to exist as a corporate entity, due to efforts by Japanese art collector Louis Ledoux. Even after the end of the war, it was decided that the Society should not resume its activities until a peace treaty was signed between the US and Japan. That treaty was to be the Treaty of San Francisco, signed in 1951.

Japan Society came back to life in 1952, with John Foster Dulles as Chairman and John D. Rockefeller III as President. The new Board of Directors included not only prominent businesspeople and society figures, but academics and members of the art world as well. As early as 1953, the Society held a dinner in honor of Crown Prince Akihito. That same year, the Society established its performing arts program, which opened with kabuki and Noh performances. Around this time, the Society also organized intellectual exchanges, in which the likes of Robert Oppenheimer, Eleanor Roosevelt, and Saul Bellow were sent on tours of Japan, or otherwise were provided opportunities to meet with their Japanese peers.

The Society shared space briefly with Asia Society in the latter's headquarters, from 1959 to 1966; it was determined in 1965 that the space was too small to continue to be shared by the two rapidly growing institutions, and Japan Society moved temporarily to a new space. In 1969, the Society helped bring the first full-scale Grand Kabuki performances to the United States.

John D. Rockefeller III remained President of the Society until 1969, when he became Chairman, remaining in that position until 1978. Rockefeller donated land on East 47th Street (across the street from the United Nations) to be used for a new headquarters for the Society. It had been decided three years earlier that Yoshimura Junzô would be the architect; Rockefeller offered to contribute one-third of the funding for the new building if other sources in Japan and the United States contributed the remaining two-thirds. The new headquarters, known for many years as Japan House, opened on September 13, 1971 after sixteen months of construction, with Prince and Princess Hitachi in attendance at the opening ceremonies. Among other features, the new building housed a permanent gallery; an exhibition of Rinpa artworks was the first in the new building.

The Society began offering Japanese language classes the following year (in 1972). Today, it offers ESL classes, and courses in Japanese calligraphy as well.

Growing more open to the public and less strictly associated with the societal elite, Japan Society expanded its activities and presence in the remaining decades of the 20th century, continuing its efforts into the 21st. The Society saw over the years (and continues to see) numerous notable events, including visits and talks by figures as prominent as HIH Emperor Hirohito and Empress Kôjun in 1975, Prime Minister Yoshida Shigeru, and Henry Kissinger, down to artists, film directors, actors and scholars from Yoko Ono, Munakata Shikô, Kusama Yayoi and Aida Makoto to Jero, Miike Takashi, Rosanjin, and Kurosawa Akira. The Society's headquarters was renovated and expanded in the 1990s to add a language school in the basement, and a fifth floor, all completely in tune with Yoshimura's original design.

The Society continues today to play a prominent role in corporate and diplomatic relations between the US and Japan, and to offer an extensive range of public programs, from gallery exhibits, lectures and talks, to films and performances (incl. many US or world premieres), and educational events. Though having perhaps had a reputation in the past of being more strongly associated with traditional Japanese arts, and an older audience, efforts in the first decade of the 21st century to include programming dedicated to contemporary Japanese pop culture, including gallery exhibits centered on anime & manga, cosplay parties, and an annual contemporary film festival, have brought Japan Society visibility and popularity with a younger audience.

In the aftermath of the 3/11 disasters in 2011, the Society established a Japan Earthquake Relief Fund which has raised a huge sum for relief and reconstruction efforts. The current President of the Society since 2009 is Sakurai Motoatsu, former Ambassador of Japan to the US, and the first Japanese-born president of the Society; similarly, the current Director of Japan Society's Gallery Tezuka Miwako, since 2012, is the first native Japanese to serve in that position.

Japan Society's current headquarters was designed by Yoshimura Junzô and opened in 1971. It was the first building in New York City to be designed by a leading Japanese architect, and as of 2011, has been named a New York City Landmark, making it the city's youngest. The structure is largely modernist in construction, being mostly rectilinear, and built using primarily modern materials, such as steel and concrete. However, with its large main entrance set off to the left side of the front of the building, and the remainder of the facade covered in vertical lattices, the design recalls Japan's traditional machiya townhouses. The main lobby features a small pool and waterfall, ringed with bamboo, recalling traditional Japanese gardens, and Japanese woods were used extensively in the interior decor. Furnishings include benches, chairs, and tables designed by Japanese architect Kenzô Tange, and ones by Japanese-American woodworker George Nakashima.