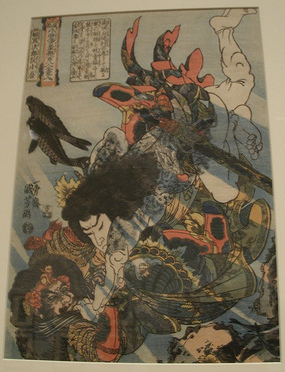 The Shuǐ hǔ zhuàn, known as Suikoden in Japanese, and variously as "The Water Margin," "The Outlaws of the Marshes," or by several other titles in English, is counted among the most famous and popular Ming Dynasty novels. Based on oral storytelling traditions going back to the Northern Song Dynasty, and compiled into a "novel" in the 15th century, the book tells the stories of 108 noble bandits, who are driven by government corruption to take matters into their own hands, fighting to "champion the oppressed and avenge the wronged;"[1] the original stories, though heavily elaborated and fictionalized, may have been based on an actual group of bandits active in Liangshan in the last decades of the Northern Song. The book was banned as subversive in the Qing Dynasty, but continued to be very widely read nevertheless.[2]

Retold and republished in numerous forms in both China and Japan, and beyond, the book remains extremely famous, and its characters widely known. It was banned for a time under the Qing Dynasty due to its anti-government themes, but continued to be widely sold anyway. Mao Zedong is known to have particularly enjoyed the story in his youth.[1]

Characters and scenes from the story appear in numerous ukiyo-e prints, especially of the 19th century. The first version of the story to be widely available within Japan, with Japanese text, was a set of illustrated books published serially between 1805 and 1835, with text by Takizawa Bakin and images by Katsushika Hokusai.

The popular Suikoden video game series, each installment of which features 108 playable characters, takes its name from the story, but shares little or no plot connections.