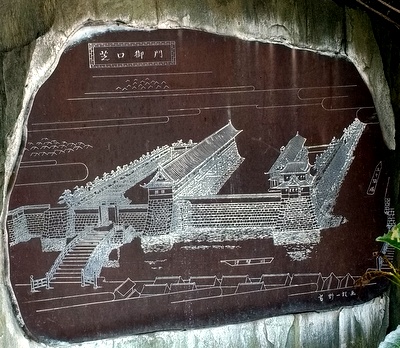 An illustration of the Shibaguchi Gate on a stone monument at its former location.

The Shibaguchi Gate was a large and ornate gate constructed in the Shiba neighborhood of Edo in 1710 at the suggestion of shogunal advisor Arai Hakuseki. It was later lost in a fire and was never rebuilt.

Not just a simple wooden gate, the Shibaguchi-gomon was an extensive masugata castle gate structure. It sat immediately at the northern end of the bridge at Shinbashi (which was renamed Shibaguchi-bashi, or Shibaguchi Bridge, at that time); crossing the bridge, one would enter a kabukimon style gate, and then turn right, watched from a watari-yagura guardtower and surrounded by high stone walls.

The gate's construction was accompanied by the reconstruction of the Naka-no-gomon, the chief southern gate into the Honmaru (central bailey) of Edo castle. Hakuseki believed that in accordance with Confucian philosophy and Chinese practice, the shogunal city and castle should have particularly impressive gates leading towards and into the castle from the south.[1]

After Hakuseki fell from power around 1716, however, the governing philosophy of the shogunate returned to that of the Hayashi clan, and numerous changes that Hakuseki made to shogunal ritual and ceremony were reversed. The Naka-no-gomon was torn down, and when the Shibaguchi Gate was lost in a fire in 1724/1, no efforts were made to rebuild it.