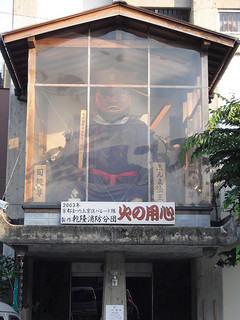 Senbon Enma-dô is a Buddhist temple and prominent pilgrimage site in northern-central Kyoto dedicated to Enma (aka Yama), the King of Hell. The site is named Senbon after the thousand cherry trees, or thousand memorial tablets, that once stood here; Senbon-dôri, a major avenue running north-south past the temple, also takes its name from this.

Every May, the Enma-dô is home to the Senbon Enma-dô Dainenbutsu Kyôgen, the only spoken-word drama of the three great Buddhist invocation dramas of Kyoto, and an Intangible Cultural Folk Heritage, as designated by the city.

A small stone tower dedicated to Murasaki Shikibu and erected in 1386 has been designated a national cultural asset. En'a Shônin, who erected it, did so in order to elevate or restore Murasaki's reputation, which he felt had recently fallen.