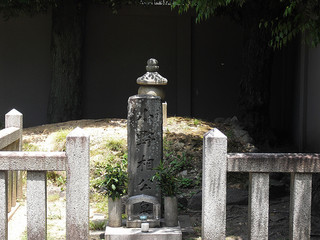 The grave of Ono no Takamura.

Ono no Takamura was a court noble and poet of the early Heian period.

He was the son of Ono no Minemori, who was among the compilers of the Ryôunshû (814/6), the first Imperially-commissioned collection of kanshi. As a child, Takamura did not excel at literary or other academic studies, and preferred martial pursuits. Noting this great difference between Takamura and his literary father, Emperor Saga gave Takamura a nickname, calling him "crazy/uncultivated Ono"[1]; this persuaded young Takamura to dedicate himself to his studies, but in the course of his literary pursuits, in one famous incident, he composed a poem insulting the Emperor.[2]

In 834, Takamura was appointed vice-envoy (fukushi) on a mission to China, but in 838, on the occasion of his third departure, he refused the requests of lead envoy Fujiwara no Tsunetsugu, and faked illness so as to avoid having to board the ship. For this, he was exiled to Iki.

During his exile, Takamura composed criticisms of the journey to China, but two years later, he was pardoned and recalled. In 847, he was appointed Sangi (Councillor). He came to be recognized as possessing a wide range of talents and great knowledge, and was much praised, with his poetry compared to that of Bai Juyi and his calligraphy to that of Wang Xizhi. Takamura's writings survive in a number of compilations including the Kokinshû, and he played a role himself in compiling other significant poetry collections.

A grave at Horikawa-Kitaôji in Kyoto neighboring that of Murasaki Shikibu has traditionally been believed to be Takamura's. His descendants include famous poets Ono no Michikaze and Ono no Komachi.