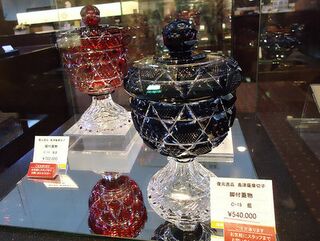 Satsuma kiriko is a style of cut glass (kiriko) developed and produced in Kagoshima prefecture (formerly, Satsuma province). Like other forms of kiriko, it involves cutting colored glass into facets, to create patterns. Satsuma kiriko is set apart by the shallowness of the cuts, creating a distinctive shading (bokashi) effect. Satsuma kiriko was produced in the Bakumatsu and early Meiji periods, but fell out of production for roughly a century, before being revived beginning in 1984.

Glass production in Satsuma is traced back to 1846, when lord of Satsuma Shimazu Narioki established the Nakamura seiyakukan (lit. "Nakamura Medicine Production Hall") and invited Yotsumoto Kamejirô and other glassmakers from Edo to come and produce medicine bottles. Shimazu Nariakira later encouraged glass production further, leading to the development of Satsuma kiriko. A particular type of red glass was developed with the help of Western Studies scholars from both within the domain and beyond, and became particularly prized.

After Nariakira's death in 1858, glass production declined, and the factory was destroyed in the 1863 bombardment of Kagoshima. The industry recovered afterwards, however, and when the Meiji Emperor visited Kagoshima in 1872, he visited the glass factory at Iso. This factory was destroyed in the Satsuma Rebellion of 1877, however, and the production of Satsuma kiriko terminated, until it was revived beginning in 1984.