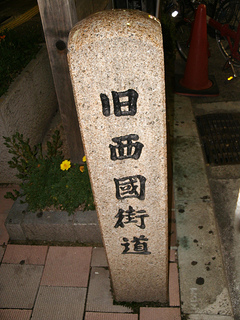 A stele at Sannomiya Station in Kobe, marking a spot on the former Saikoku Kaidô.

The Saikoku Kaidô (lit. "Western Provinces Highway") was a major trunk route connecting Kyushu to the Kinai (the Home Provinces around Kyoto).

The road had its start in 701, with the promulgation of the Taihô Codes, and was used by officials traveling to Dazaifu before the San'yôdô was established. It continued to be a prosperous route in the centuries following, and in the Edo period, the route came to be called the Saikoku Kaidô.

The road has not been maintained up into the present, but enough traces of the road remain today that its path can be traced. Starting from Kyoto, following the modern Route 171, the road ran along the sea from Nishinomiya to Ashiya (near modern-day Kobe), and then split between the seashore road used by the peasants, and the more inland road used by prominent processions. The area around the road developed, and became more prosperous, with the many travelers traveling along the road.

The Saikoku Kaidô continued to be used in the Meiji period, as a major central road leading to the Western Provinces, but in 1927, National Route #2 was completed, taking over the highway's role.