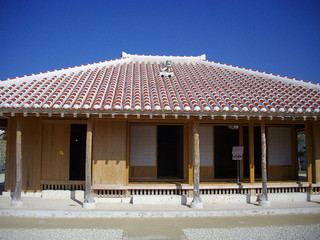 A stereotypical traditional Okinawan home, on display at the Okinawa Prefectural Museum

Okinawa's architecture, typified in its gusuku (noble & royal castles) and minka (vernacular residences), incorporates Chinese, Japanese, and Southeast Asian influence in rather distinctive local forms. Red-orange earthenware roof tiles and the white Okinawan limestone used in walls are among the most recognizable, or often-cited, features.

Pit-dwellings first appeared in the early Shell Mound period (c. 2000-1000 BCE), reaching their height around the middle of that period (c. 1000 - 100 BCE). The largest covered around ten square meters. Two styles of square pit dwellings have been found in Okinawa: some were simply dug into the red earth, while others, especially those in sandier areas, were encircled by limestone walls. Neither of the two forms featured hearths. Several communities of forty dwellings or more have been discovered on the island, including those at the Shinugudô site in Yonagusuku and the Nishi-Nagahamabaru site in Nakijin.

In the Late Shell Mound Period (c. 100 BCE - 1000 CE), pit dwellings were replaced with structured supported by pillars embedded in the ground. 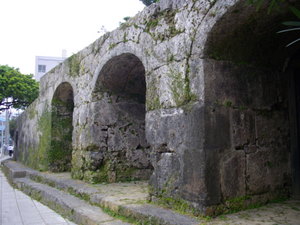 Okinawan architecture uses stonework extensively, in the walls of residential compounds, the walls of castles (gusuku), and stone bridges. While the styles of stacking stones are similar to those used in Japan, Okinawan stonework most often uses the Ryukyus' distinctive white limestone, resulting in an aesthetic rather different from that in mainland Japan. There are three main types of stonework in Okinawan architecture: nozura-zumi (野面積み), aikata-zumi, and nuno-zumi (布積み).[1]

Nozura-zumi ("rough surface stacking") is the oldest of the three styles of stonework, and simply involves stacking stones of various sizes and shapes so that it is functional as a wall or structure, but without attention to aesthetic pattern or order. Aikata-zumi ("matching form stacking"), also known as kikko midare-zumi ("turtle shell mixed-up stacking"), involves carving the stones so that they fit more nicely together; this usually involves stones being carved into hexagons or octagons, such that when they are stacked, even if one is removed, the rest hold one another up. Finally, in nuno-zumi ("cloth stacking"), also known as tôfu-zumi ("tofu stacking"), stones are carved into rectangular shapes and stacked; this form is aesthetically attractive, but has the disadvantage that when one stone is removed, there is the risk of the entire section falling apart.[1]

Castle gates, stone bridges, and certain other structures made extensive use of arches. These Okinawan arches differ from European architectural styles in one key way - namely, that where Western-style arches use a series of long stones arranged perpendicular to the arch, Okinawan structures place the long stones parallel to the curve.[1]

A village headman's home (mûtuyaa) at Ocean Expo Park. The hinpun (in this case in dark stone) is visible within the opening in the stone wall, blocking direct view of the house and protecting it from evil spirits. 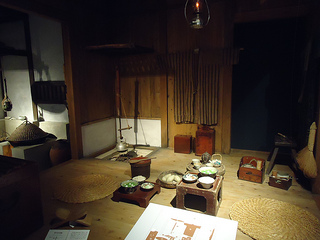 The bare wooden-floored ita-no-ma of a typical Okinawan home, with hearth in the far corner, and a glimpse of the kitchen off to the left. Display at the Okinawa Prefectural Museum.

Okinawan homes were often constructed in a style called nuchijaa (貫木屋). Nuchijaa homes are one-story structures built in wood, with red pottery roof tiles, and surrounded by white limestone walls. Sections of the wall are left open to allow for access, and for breezes to pass through; rather than being wide open, however, the entrance opening in the wall is blocked with a stone section called hinpun,[2] which provides privacy for the family (preventing passersby on the street from seeing directly into the home), and is said to block the entry of evil spirits. A pair of shisa (lion-dogs), typically in ceramic, are placed atop the roof or on either side of the gate, also in order to protect the home from evil spirits.

During the time of the Ryûkyû Kingdom, red ceramic tile roofs were limited to the aristocracy; most commoners lived in thatched-roofed homes. It was only in 1889 that these restrictions were abolished, and the aristocratic style of house became more widespread, and became more strongly associated with being the iconic standard or stereotypical form of Okinawan architecture.[3]

The home itself is elevated a short step above the ground, like Japanese homes, and is held up by wooden pillars, with most if not all of the walls separating rooms being comprised of sliding panels (i.e. sliding doors). Many of these are left open, especially in summer, in order to allow breezes to pass through to ameliorate the high temperatures and humidity typical of Okinawa's climate. A porch running along the front of the house, under the eaves, known as amahaji and facing the front yard, provides a breezy and shaded space to sit. More rural homes might have additional buildings, or additional areas within the walls, including livestock sheds, pigsties, vegetable gardens, and/or a well.

The interior of the home itself might typically consist of four to five rooms, plus a kitchen. As in traditional Japanese homes, the kitchen is located in an earthen-floored area, a step down from the elevated wooden floor, but immediately adjacent to another room, and contained under the same roof. The hearth (irori) is often located in a room with bare wooden floorboards, known as ita no ma ("planks room") in Japanese. Two "front rooms," known simply as the ichibanza ("first room") and nibanza ("second room"), serve as rooms for entertaining guests. These spaces typically have tatami on the floor, and contain the tokonoma (O: tuku) and family altar (butsudan, O: buchidan), respectively. Behind these rooms, towards the rear of the house, are typically a pair of "rear rooms," known simply as ichiban (number one) and niban (number two) uraza (rear room). These serve as the family's bedrooms and private spaces.

An additional structure known as an asagi or mae no ie is sometimes located nearby, serving as residence for an older member of the family, such as the retired former head of household, or his wife or widow, mother to the current head of household; such a space might also be used to house other family or guests.

Many homes once had stone pigstys called fûru located nearby. These were divided up into small sections to hold pigs separately, and had either stone arches or thatched awnings as the roof. The construction of new fûru-style pigstys was banned in 1816, and those with a particular style of feeding hole called tûshinumii were destroyed, for reasons of health and sanitation; in the postwar era, very few survived or were rebuilt.[4]

In the Amami Islands and some other areas of the Ryukyus, kitchens (Amami language: toogura) were traditionally housed in a separate structure, linked to the main house (omote) by a small bridge-like walkway known as a toima or kayoi. The size and layout of these two structures, as well as their locations relative to one another, varied from case to case. Homes typically included a number of other small structures as well, including for housing animals and for doing craftwork or other small-scale work. Elevated storehouses known as takakura were also a common feature of such homes. The entire 'compound' would be surrounded in stone walls or hedges, to help protect against typhoons.[5]