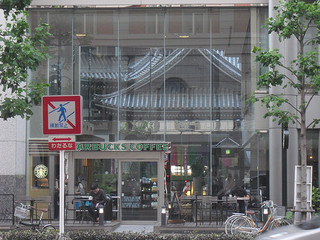 The Rokkakudô, as seen through a glass-walled Starbucks.

The temple was founded by Shôtoku Taishi, and constructed using materials from the Shitennô-ji in Osaka. It is said that the protective image of Kannon was installed at this time as well. The place was revered by people from very early on, and in 822 it became Emperor Saga's Imperial prayer site. In 996, former Emperor Kazan made a formal imperial visit, and the temple became one of the 33 Kannon temples of the Western Provinces (Saikoku).

Shinran visited in 1201, retiring to the temple for 100 days of prayer and receiving information from the spirits. His experience there was a crucial step towards his later founding of the Jôdo Shinshû sect of Buddhism.

The main hall contains a Kannon believed to have once been used by Shôtoku Taishi for his own personal devotions, a statue of Shinran, and an image of Bishamonten which is an Important Cultural Property, among other treasures.

A hexagonal stone in front of the hall is called the Navel Stone, and is said to have marked the center of Kyoto in ancient times. The priests' quarters to the north of the main hall are known as Ikenobô; the pond there has turned out great numbers of pond plants since the Muromachi period, and is regarded as the site of the origin of ikebana. Even today, this area is the center of activity for the Ikenobô school of ikebana.

The Rokkaku clan of samurai took their name from their association with the neighborhood around the temple.