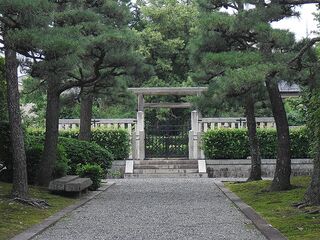 The formal mausoleum of Emperor Kazan: Kamiya-gawa no hotori no misasagi, in northern Kyoto

Emperor Kazan was an emperor of the Heian period,

He was named Crown Prince (imperial heir) on 969/8/13, as his father Emperor Reizei abdicated the throne in favor of Kazan's uncle (Reizei's brother) Emperor En'yû. Kazan would then succeed his uncle in 984.

He was a grandson of Fujiwara no Koretada. Fujiwara no Yoritada served as kanpaku throughout Kazan's reign.

After only a two-year reign, Kazan abdicated the throne in 986 in favor of one of his cousins (a son of Emperor En'yû), who then took the throne as Emperor Ichijô. A poem Kazan composed on the occasion of his abdication has come to associate him, famously, with the moon. It reads:


I should like
Another moon
to see.
The one [seen] from my own house
Would it be as moving?


The poem speaks of Kazan's trepidation at leaving the comforts and pleasures of his old life for a new one (in retirement). Due to this poem, and Kazan's association with the moon, a depiction of Kazan was included by ukiyo-e artist Tsukioka Yoshitoshi in his series "100 Aspects of the Moon."

Though Emperor Kazan was buried at Ryôan-ji alongside many other emperors, his official mausoleum is considered to be Kamiya-gawa no hotori no misasagi in the Kinugasa-takahashi neighborhood of northern Kyoto.