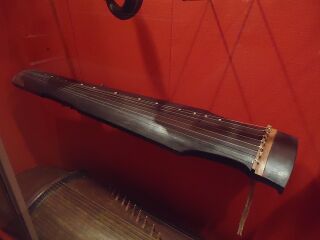 A qin on display at the Metropolitan Museum

This page is about the musical instruments. For other meanings of the word Qin, see Qin (disambiguation).

The qin is a traditional Chinese musical instrument. A thirteen-stringed zither, it is closely related to the guzheng and to the Japanese koto. The standard form of the qin is said to date back to the Han Dynasty (c. 206 BCE-220 CE), and is the instrument most classically associated with the literati.

The instrument is spoken highly of by Confucius, among many others, and is said to have a variety of metaphysical characteristics and abilities, including communicating one's character and emotions; cultivating personal character & morality; subduing demons and evil spirits; and enhancing life and enriching learning. Images and descriptions of literati (C: wénrén, J: bunjin) playing musical instruments most often refers to the qin; musical ability and cultivation as one of the Four Accomplishments of the Confucian gentleman likewise refers most typically to the qin, over other instruments. These images and descriptions most often show a literatus playing the qin in a garden, mountain retreat, or otherwise out in nature.