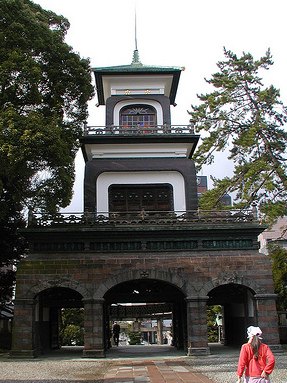 Oyama Shrine was established originally as Utatsu Hachimangū, in 1599. It was dedicated to Maeda Toshiie, who would shortly afterwards become the first Edo period daimyô of Kaga han, and to his wife Matsu.

The shrine was moved to its present location several centuries later, in 1873, and renamed Oyama Shrine. The site had previously been the location of the Kanaya Palace, a secondary residence of the Maeda lords.

The eastern karamon-style gate, known as the "Black Gate" (kuromon) is the only surviving Momoyama-style element of Kanazawa Castle. Originally a gate in the ninomaru (second bailey) of the castle, it was moved here to Oyama Shrine.

The main shrine gate, inlaid with diamonds, was built to give the feeling of a foreign country. Partially built in red brick, it incorporates Japanese, Chinese, Dutch, and other Western elements, including stained glass windows, which were repaired most recently in 2002.

New statues of Maeda Toshiie and Matsu were erected at the shrine in 2000.

The garden, originally that of Kanaya Palace, is of the chisenkaiyûshiki style, organized around a path that circles a pond. The pond was once fed from the Tatsumi-yosui Canal, and includes three islands and a bridge in the old writing room / study room (shoin) style.