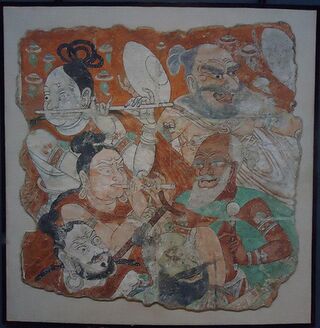 Buddhist cave paintings from Bezeklik, in Uighur lands, collected by the Ôtani missions

The Ôtani missions were a series of three research expeditions to western China, exploring sites related to the Silk Road and the origins of East Asian Buddhism.

The missions were dispatched by Ôtani Kôzui, 22nd abbot of the Nishi Honganji. In contrast to Central Asia missions sent from other countries, which focused on political purposes or archaeological or anthropological research, the Ôtani missions were motivated by Buddhist devotion, and desires to uncover the origins and history of Buddhism.

A great many of the artifacts collected on these missions are today in the collection of the Tokyo National Museum.