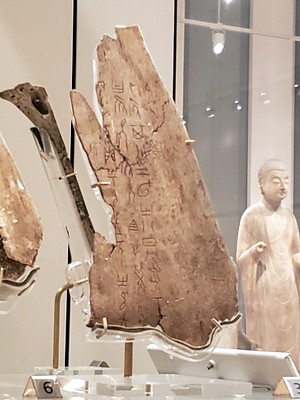 A Shang dynasty oracle bone made from tiger bone, on display at the Royal Ontario Museum

The interpretation of cracks in heated turtle shells and animal bones as a means of divination was a prominent feature of ancient Chinese culture in the centuries and millennia BCE.

The materials used - chiefly the plastral (stomach) shells of turtles, and the shoulder blades of cattle or water buffalo - were imported from southern China, or elsewhere, making them relatively precious objects. They were prepared by being scraped and polished, possibly soaked and dried, and inscribed with grooves, before shamans inscribed questions or other inscriptions on them. The shell or bone was then heated until it cracked, and the shape, length, and placement of the cracks was then interpreted either by a shaman or by the king himself, to have various meanings or implications for the king or kingdom. Elements of the interpretation were then inscribed onto the same cracked piece of bone or shell. Questions asked to the spirits covered a range of topics or types, but often concerned seeking affirmation that it was auspicious (or at least, not inauspicious) to engage in a particular construction project, military action, or the like, asking about the meaning of the king's dreams, or about various matters related to the health of the king and his family, including about the security of his lineage. In executing this ritual, it may have been believed that the king made a spiritual journey, or spiritual connection, to speak with ancestors or gods. Music, dance, and alcoholic drink may have been involved.

It is unclear how many individuals were involved in the ritual. Though there are indications that the king may have himself performed the interpretation, it is unclear whether he or someone else did the inscription onto the bones, whether the oracle or shaman who initially received the questions or concerns from the king was the same individual who inscribed the inscriptions onto the bones, or whether they were the same person who, following a completed rite, filed away the inscribed bones as a record to be consulted later. These many functions may have been performed by a single individual, or by many different individuals in different professions or posts.[1]

The practice is said to have begun in North China in the 3rd millennium BCE; this is believed to be the earliest instance of such practices in the world. The practice reached its height in China under the Shang Dynasty in the mid-2nd millennium BCE, and continued into the Zhou Dynasty, eventually dying out before the beginning of the Common Era. Meanwhile, similar practices emerged among other cultures around the world, some of whom continued to engage in such practices down into the 20th century; some groups may even continue such practices today.

Oracle bones were discovered in archaeological excavations in China beginning in 1898, and since then over 200,000 oracle bone fragments have been found,[2] providing some of the earliest extant evidence of Chinese writing, law & governance, spiritual belief & practice, and culture otherwise. Some such bone and shell fragments feature valuable information such as the names of kings, kingdoms (states), and reign/era names.