Okinawa Prefectural University of the Arts 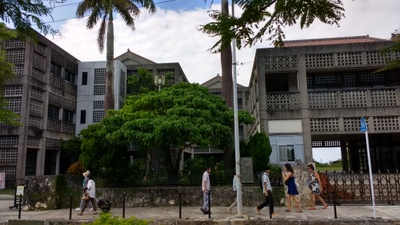 The main campus of the Okinawa Prefectural University of the Arts

The Okinawa Prefectural University of the Arts, often known colloquially as Okigeidai or Okinawa geidai, is a small public university for performing arts and fine arts, located in Shuri (Naha City) on Okinawa Island. The premiere university in the world for studying Okinawan traditional arts (including music, dance, kumi udui theatre, textile arts, painting, ceramics, and lacquerware), it is the only public university of the arts in Japan south of Hiroshima.

The university's main campus is located on the former site of the Kaizuri bugyôsho, a Ryukyu Kingdom government office responsible for the production of lacquerwares and many other fine craft items for the royal court. Though there were for a time discussions of establishing the school on the former site of Shuri castle, alongside the University of the Ryukyus (est. 1950), the coalescence in the 1980s of plans to restore the castle led to the University of the Ryukyus being relocated to the nearby town of Nishihara, and the University of the Arts being established in the Tônokura neighborhood below the castle, where it remains. A second campus is located a short distance away, in the Kinjô neighborhood of Shuri.

The university's library, though small, boasts one of the most extensive collections of academic journals, magazines, museum catalogs, and other publications related to Okinawan arts; many publications within those fields can be more reliably found there than at any university library in Tokyo (or elsewhere in the country). The university's special collections are also home to the original notebooks of prewar scholar Kamakura Yoshitarô, who sketched, transcribed, or otherwise recorded countless invaluable texts, descriptions, and images pertaining to Okinawan arts, history, and culture. The university has digitized many of these notebooks and made them available online, as well as publishing modern-type transcriptions.[1]

In addition to numerous Western music ensembles, Okinawan sanshin music, Ryukyuan dance, and so forth, the university also features an Indonesian gamelan, on which students learn to play a combination of Indonesian pieces and Okinawan folk songs adapted for the gamelan.