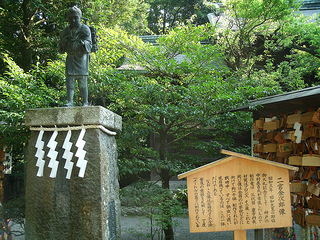 Ninomiya Sontoku was a prominent thinker of the late Edo period, who wrote chiefly on morality & philosophy, and on agrarian policy and planning. Some of his writings were esteemed enough that they were revived in the 1920s-30s to be incorporated into programs for rural reform at that time.

Sontoku was born a peasant, but later grew to be an influential thinker and writer.

Among his writings are some which address the so-called "three teachings" (Shinto, Buddhism, and Confucianism) and their blending together such that they are inseparably intertwined. He describes the three writing "Shinto is the Way which provides the foundation of the country; Confucianism is the Way which provides for governing the country; and Buddhism is the Way which provides for governing one's mind."[1] He then compares one's learning in these three teachings to one taking a pill; he writes of how a friend drew a diagram, a pie chart, labeling one half Shinto, one quarter Buddhism, and one quarter Confucianism, to which Sontoku replied that real medicine is all blended together such that the separate ingredients are indistinguishable.

He was granted the official position of fushinyaku (public works official). He died on 1856/10/20 and was posthumously granted the Junior Fourth Rank.[2]