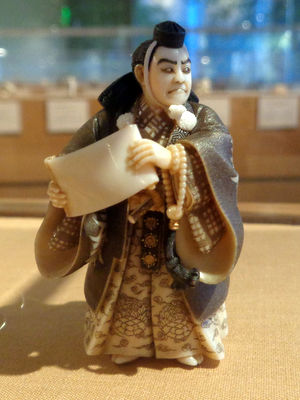 Musashibô Benkei, or "Benkei, monk of Musashi," was the quasi-legendary companion of Minamoto no Yoshitsune. A powerful yamabushi, he appears in the Tale of the Heike, the Gikeiki ("Chronicle of Yoshitsune"), and numerous Noh and kabuki plays. Some scholars have expressed doubt, however, as to his historicity.

Known by the childhood name Oniwaka or Oniwakamaru, Benkei served as a page-boy at Mt. Hiei when he was a child. However, gifted with great physical strength, he abandoned the path of the monk to focus on training in martial arts. During the course of his training, he is said to have gone undefeated against many hundreds of opponents before being defeated, famously, by a young Yoshitsune at Gojô Bridge in Kyoto. From that point forward, Benkei pledged his service to Yoshitsune, and became his right-hand man and bodyguard.

Following the end of the Genpei War, when Shogun Minamoto no Yoritomo sent men to kill his younger brother, Benkei helped Yoshitsune flee to Hiraizumi, where he could be sheltered by Fujiwara no Hidehira. It was during this journey that many of the pair's legendary encounters, retold in Noh and kabuki dramas, are said to have taken place. One of the most famous, seen in the Noh play Ataka, the kabuki play Kanjinchô, and the Kurosawa film The Men Who Tread on the Tiger's Tail[1], takes place as they attempt to sneak past the barrier checkpoint at Ataka (in Kaga province), disguised as monks collecting donations for the reconstruction of Tôdai-ji, destroyed in the war. Other episodes, as seen in Funa Benkei and Yoshitsune Senbon Zakura, include the pair being attacked by Taira no Tomomori, or his ghost.