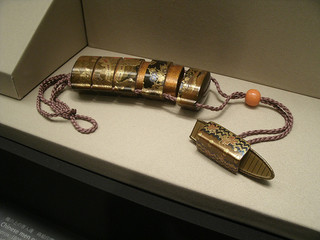 An inrô (segmented box) on display at the Asian Art Museum in San Francisco. A small bead known as an ojime was used to pull the box closed; a netsuke, seen on the right, would have sat on the top edge of the kimono belt (obi), and kept the entire thing from falling.

Netsuke are small toggles, made from a wide variety of materials, which were traditionally used to help hold inrô or other small bags or boxes hung from one's belt. The string from which the inrô or bag hung was passed under the belt (obi) of one's kimono, and a netsuke was affixed above the belt, holding it from falling through.

As netsuke are quite small, and survive in great numbers, they quickly became in the Meiji period a particularly popular souvenir or collectors' item in the West, and around the world. Despite their somewhat niche origins among the vast array of traditional Japanese arts & crafts, netsuke today are among the most common objects to be found in both museums and private collections of Japanese art today.