The Mogami mon, which is the same as that of the Shiba – from whom the Mogami were descended.

Yoshiaki (who held the ranks of Dewa no kami and Ukyô-daibu) was the eldest son of Mogami Yoshimori (1521-1590) and ruled a large domain in Dewa Province. He clashed repeatedly with the Date and Uesugi clans in the Shônai area and Senboku areas to expand Mogami influence and became known as a capable leader. In 1590 he submitted to Toyotomi Hideyoshi and later, in the hopes of securing his clan's future, sent his daughter (Komahime) to be a concubine of Toyotomi Hidetsugu, Hideyoshi's nephew. Komahime had just arrived in Kyoto when Hidetsugu was suddenly ordered to commit suicide and his family was put to the sword. Yoshiaki, who felt much affection for his daughter, attempted without success to save Komohime and himself fell out of favor as a result of the affair (which pleased his many rivals in northern Japan). Yoshiaki was said to have been enraged and saddened by the event, and nursed a grudge against the Toyotomi that saw him drift towards Tokugawa Ieyasu. He sent his second son, Iechika, as a hostage to the Tokugawa and supported Ieyasu during the Sekigahara Campaign, where he assisted Date Masamune (his brother-in-law, despite their earlier feuds) in containing the activities of Uesugi Kagekatsu. After the Tokugawa victory at Sekigahara, the Mogami clan's income was increased from 330,000 to 570,000 koku. Yoshiaki was later compelled to order his eldest son to commit suicide by Ieyasu, who perhaps desired the second son as heir. Yoshiaki's grandson, Yoshitoshi, would cost the family dear by allowing internal problems to get out of control - in 1622 the Tokugawa ordered him to give up his fief in Dewa and move to Ômi Province, leaving him with a mere 10,000-koku income. 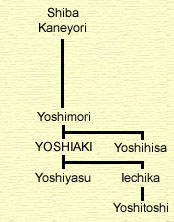