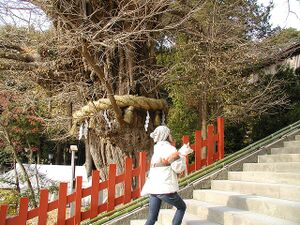 The massive ginkgo at Tsurugaoka Hachimangû behind which Minamoto Kugyô hid before springing out to assassinate Shogun Minamoto no Sanetomo in 1219. The tree fell over in a storm in 2010, but is being regrown from cuttings

Minamoto no Kugyô was a son of shogun Minamoto no Yoriie. He is most known for his assassination in 1219 of his uncle Minamoto no Sanetomo, who had succeeded Yoriie as shogun.

Kugyô was the eldest of three children who Minamoto no Yoriie had with a wife from the Kamo family; his younger brothers were known as Senjûmaru and Zengyô. He also had two half-siblings, Minamoto Ichiman and Take no gozen, born to Wakasa no Tsubone, Yoriie's wife from the Hiki clan.

Kugyô survived the Hôjô clan extermination of the Hiki clan, and was then adopted by his uncle Minamoto no Sanetomo at the suggestion (or urging) of Sanetomo's mother, Hôjô Masako. Kugyô was then entered into training at the Buddhist temple of Onjôji (aka Miidera, near Kyoto) and the Shinto shrine of Tsurugaoka Hachimangû in Kamakura. Kugyô was a monastic name he took on during this time.

On 1219/1/27, Kugyô would assassinate Sanetomo immediately following a ceremonial celebration at Tsurugaoka. Kugyô is said to have hidden behind a large ginkgo tree just to the side of the main stairs within the shrine, jumping out to strike Sanetomo. Some sources make no mention of the tree, however, indicating that he emerged from beneath or to the side of the stairs. It also remains unclear how Kugyô was able to get past Sanetomo's personal guards or entourage otherwise; though some sources indicate that Sanetomo would have been accompanied by quite a number of men, leaving the shrine with him following the end of the ceremony, some sources make no mention of any such guards or retinue.

Much else remains unclear about this attack, as well, including Kugyô's motivations, whether he had accomplices, and if he was not acting on his own motivations then who may have been behind the attack. While the Gukanshô mentions accomplices, the Azuma kagami does not. Some have suggested that Hôjô Masako may have had motive to see her son killed, so that she could exercise more influence over the shogunate. In fact, following Sanetomo's death, Masako exercised considerable de facto power for several years in the absence of a new shogun; she also played a key role in selecting the next shogun when he was appointed. Others have pointed to Regent Hôjô Yoshitoki's sudden claim of illness and withdrawal from the ceremony shortly before the assassination took place; Yoshitoki's proxy, to whom he lent his sword, was killed in the incident, leading some to believe that Yoshitoki had fore-knowledge of the assassination effort. Some have also suggested the involvement of Miura Yoshimura, to whom Kugyô fled immediately after the assassination, reportedly then discussing with Yoshimura how Kugyô was to be named shogun.

Ultimately, Kugyô was betrayed by those he believed to have been his supporters. After fleeing up into the hills behind Tsurugaoka, he met a party of warriors who he believed had been dispatched to escort him to safety at an accomplice's home. He found, however, that to the contrary the man he thought to be a supporter or accomplice had actually sent them to kill him, which they then did.

This article is a placeholder or stub. You can help SamuraiWiki by expanding it.
Retrieved from "http://samurai-archives.com/w/index.php?title=Minamoto_no_Kugyo&oldid=39620"
Categories: