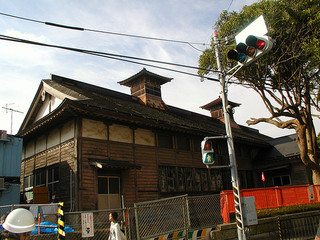 A Meiji or Taishô era schoolhouse now used as storage, on the grounds of Onari Elementary School in Kamakura

The Meiji period saw the advent of public education, and its expansion to include most, if not all, of the children in the archipelago. Public education in this period made literacy, mathematical skills, and general knowledge of a variety of subjects much more easily accessible to a much wider range of people than ever before; the standard national curriculum also played a crucial role in creating a Japanese citizenry cognizant of an identity as citizens of a unitary modern state of Japan.

Elementary education was initially (as of 1872) deemed mandatory for only sixteen months, but this was extended to four years in 1886.[1] However, elementary schools were locally funded, through a 10% surcharge on property taxes,[2] and many suffered not only from lack of funds, but also shortage of teachers, and much resistance from families who refused to send their children to school. Many families may have felt they needed the extra hands to help with work at home, on the farm, or in the shop, and in the 1870s some 50-75% of age-eligible children were kept at home rather than being sent to school. Some took their resistance to mandatory education - and the associated taxes - more actively, with rioters destroying roughly ten percent of the schools in the country, roughly 2,000 buildings, in that same decade.[2]

This eventually shifted and changed, however. As early as 1868, roughly 10% of school-age girls were already attending school. The first Japanese Normal School (teacher-training universities) was established in Tokyo in 1872, and by 1900, most children of school-age, both boys and girls, were attending school. In 1905, attendance rates stood at 98% for boys, and 93% for girls.[2] The four-year mandate was reintroduced, and was successfully expanded to six years in 1907.

The government established the Ministry of Education in 1871, on the French model of a centrally administered education system and nationwide curriculum. Much of the Ministry's first budget, in 1873, was dedicated to bringing foreign teachers to Japan, and one-eighth of the entire budget was devoted to funding Japanese students to travel abroad; two hundred and fifty did so that year. By the 1880s, however, with Japan's own education system (including universities on the Western model) more firmly established, the number of students traveling abroad each year diminished, to around 50-80 students per year.

Recognizing the power of public education to instill a moral education, officials debated the nature or character of that moral education. Some advocated an education grounded in traditional Japanese/Confucian ideals, while others supported an education based around the liberal ideals of the Western Enlightenment. Still others, including Mori Arinori (Minister of Education 1885-1889), rejected both in favor of a "modern" nationalist curriculum. Ultimately, the Imperial Rescript on Education, drafted with considerable influence from Imperial advisor Motoda Eifu and promulgated in 1890, declared a set of nationalistic core principles which would then be memorized by Japanese schoolchildren up through 1945. The Rescript employs Confucian justifications to suggest an unbroken Imperial Japanese past, emphasizing filial piety, the pursuit of learning and cultivation, the public good and common interests, and personal sacrifice for patriotic duty.