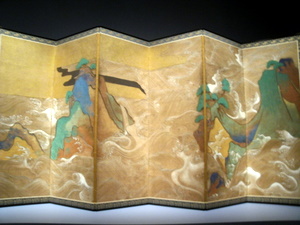 A folding screen painting of Matsushima by Tawaraya Sôtatsu, today at the Freer Gallery of Art. Ogata Kôrin produced a similar work roughly 100 years later, based on this one. His is now held at the Museum of Fine Arts, Boston.

For other meanings, see Matsushima (disambiguation).

Matsushima is a collection of more than 260 tiny pine-covered islands located off the coast of Miyagi prefecture. Along with Itsukushima Shrine and Amanohashidate, it is considered one of the Three (Most) Beautiful Views in Japan.

Among the famous sights amongst the Matsushima islands are the temple of Zuiganji, built in 828 and significantly restored in 1609; and the Godaidô Hall, which was originally built in 807, and rebuilt in 1604.

Though the 2011 March 11th tsunami directly struck Matsushima, its force was broken up by the islands, protecting both the islands themselves and a section of nearby mainland coastline from more severe damage.