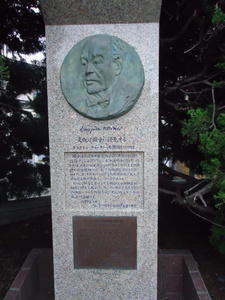 A stone marker & plaque erected in honor of Langdon Warner, outside Kamakura Station.

Langdon Warner was an American scholar of East Asian art history, famous for his supposed role in persuading the US military to not bomb Kyoto, Nara, and Kamakura during World War II, but also infamous for his supposed involvement in looting priceless wall paintings and sculptures from the ancient Chinese Buddhist cave temples at Dunhuang and Mogao. One of the last of the 19th-century-style "scholar adventurers," he played a notable role in the formation of the formal field of study of East Asian art history, and during his time at Harvard University taught such future prominent scholars as Laurence Sickman (later of the Nelson Atkins Museum) and Alan Priest (later of the Metropolitan Museum of Art).[1]

The son-in-law of Theodore Roosevelt, Warner worked for a time at the Museum of Fine Arts, Boston, as an assistant to Okakura Kakuzô. The museum then sent him to Japan in 1907, where he studied for a time at the Tokyo School of Fine Arts, and began collecting Japanese art objects. Among his travels, he journeyed to Okinawa in November 1909, where he bought a number of Okinawan folk art objects, with the intention of selling them either to Harvard's Peabody Museum, or to Edward Sylvester Morse, who might in turn donate or sell them to the Peabody-Essex Museum in Salem, Massachusetts. In the end, neither Harvard nor Morse were able (or willing) to purchase the 134 Okinawan objects Warner had collected, but they made their way to the Peabody-Essex anyway, after being bought by Charles Weld, who in turn donated them to the Salem museum. Warner gave his daughter ten works of Okinawan textiles which he did not sell to Weld; she later donated them to Harvard's Sackler Museum. During his time in Japan, he also met Yanagi Sôetsu, who he later invited to become an art instructor at Harvard.

In the 1920s, he is said to have carved twenty-six ancient murals from the walls of the Mogao Caves at Dunhuang, in China, and to have donated them to the Harvard Art Museums.[2] From April until September 1946, he served as an advisor to the Monuments, Fine Arts, and Archives program ("Monuments Men") division in Japan.[3] Sometime shortly afterwards, in his capacity as curator at the Harvard Museums, he was asked by a Commander Carl W. Sternfelt to help identify some objects Sternfelt had acquired in Okinawa. One turned out to be one of the only surviving copies of the Omoro sôshi, a collection of ancient poems and myths; Warner convinced Sternfelt of the importance of this and a number of other items, which he then relinquished to the museum. The Omoro sôshi was returned to Okinawa in 1953, but some believe that other precious Okinawan artifacts, including perhaps even a Ryukyu investiture crown, may still be in the possession of Sternfelt, the Harvard Museums, or elsewhere in New England.[4]

Warner later wrote a number of pieces on Japanese art history and aesthetics, including at least one work on sculpture from the time of Empress Suiko (r. 593-628). The Shôwa Emperor awarded Warner the Order of the Sacred Treasure, Second Class for his work in spreading appreciation of Japanese art.

He is often credited with convincing the US military of the cultural and historical value of Kyoto, Nara, and Kamakura, and thus rescuing those cities from the ravages of World War II. However, some sources indicate that that idea has been discredited, and that Secretary of War Henry L. Stimson may be the one to thank.[3] Nevertheless, monuments to Warner have been erected at five sites in Japan, including on the grounds of Hôryû-ji, and just outside Kamakura Station.