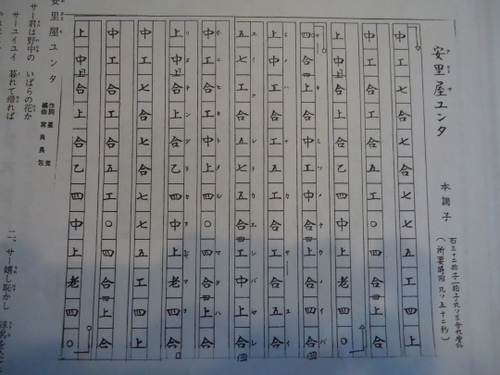 Kunkunshi is the style of musical notation used for playing the Okinawan three-stringed sanshin, and elsewhere in Okinawan music.

Kunkunshi is believed to have been first developed by Terukina Mongaku (1682-1753), or by his student Yakabi Chôki (1716-1775). However, it only became standardized and used widely beginning in the last decades of the 19th century, or in the early 20th century. The oldest extant examples of the notation system are a compilation of tablature and lyrics to 117 pieces, attributed to Yakabi Chôki; the notation system takes its name from the first three notes (kun-kun-shii)[1] in this compilation.[2]

Most notes are of the same length as one another, one note per box. The sanshin is a monophonic instrument, meaning it does not make extensive use of chords, but rather is nearly exclusively played one note at a time, each note played one after another at a constant tempo (albeit sometime with half-notes in-between, called kubanchi); that tempo is indicated near the title of the song, the units of measurement based on the heart-rate of the author of the notation or compilation.

Often, additional notes will be played quickly and softly between two "standard" notes; these are called kubanchi and are denoted with a kanji written smaller, and on the line between boxes (an example can be seen in a 四 note near the end of the second column in the above example). Notes are typically always played in a downstroke manner; where upstrokes, called kaki utu, occur, they are denoted by a 90-degree angle drawn to the top right of the kanji (as seen on a 上 note in the left-most column in the above example). Another common technique, which is a key component of the sanshin's distinctive sound, is the hammer-on, called uchi utu in Okinawan; the left hand strikes the appropriate point for the fingering of that note, but the right hand does not play it. This is denoted by an apostrophe-like mark to the upper-right of the note to be struck. Slides (uchi urushi) and notes played together (chiri bichi) are uncommon, but when they occur, are denoted by a straight vertical line connecting the two notes, either to the left for slides, or on the right for chiri bichi.

The Nomura-ryû school of classical uta-sanshin (song and sanshin) uses a system of notation for vocal pitches as well, but outside of Nomura-ryû, vocal notation is not particularly common.