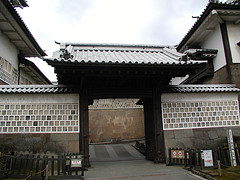 The Kôraimon at Kanazawa castle, from the front (exterior). 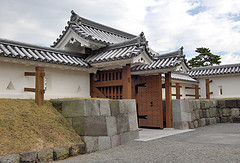 A Kôraimon at Odawara castle, seen from the interior side of the gate, the distinctive side-pillars visible.

Kôraimon are a particular style of gate seen at a number of Japanese castles, Buddhist temples, and daimyô residences, distinguished by the two roofed structural elements which sit perpendicular to the gate itself. Kôraimon often form the main entrance to a masugata (square) gatehouse, requiring a 90 degree turn to progress into the compound through the succeeding, perpendicular, yagura-mon; these are particularly seen when the kôraimon serve as a main castle gate at the end of a bridge, such as in the Ishikawa-mon of Kanazawa castle.

The name literally means "Korean gate," after the supposed resemblance to Korean styles of architecture, though there is no actual direct connection between this particular architectural form and Korea. This style of gate is also sometimes called kabukimon (冠木門), literally meaning simply "roofed gate" or "gate with a crossbar."

The gate itself and the two side structures each bear a simple peaked tiled roof, protecting the structure from the elements to some extent.

Castles which feature Kôraimon include Edo castle, where it is seen in the Shimizumon, Nagoya castle, Himeji castle, and Kanazawa castle.