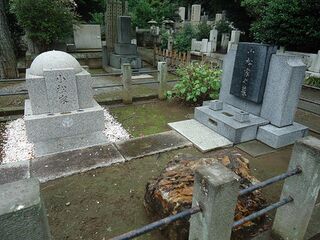 Grave of the Komatsu family, including Teruhisa, at Gokoku-ji in Tokyo

Komatsu Teruhisa was a prominent naval officer of the 20th century.

Born in Tokyo the fourth son of Prince Kitashirakawa Yoshihisa, he graduated from the Naval College, and was granted the name Komatsu in 1910. That same year, he became a navy sub-lieutenant (shôi). Komatsu later served as the commanding officer of the First Submarine Squadron and of the 17th Sea Mines Squadron, principal of the Navy Submarine School, vice principal of the Naval College, and commander of the Nachi, before being named to the rank of vice-admiral (chûjô) in 1940. Komatsu then served for a time as commander of the Ryôjun Guard District (旅順要港部), eventually rising to the rank of captain (taisa) and being named head of the Sixth Fleet in 1942. The following year, he became the chief commanding officer at Sasebo Naval Base, and in 1944, he became head of the Naval Academy.

In the postwar era, Komatsu served for a time as chief priest of Heian Shrine. He held a court rank of Upper Third Rank, First Class (正三位勲一).