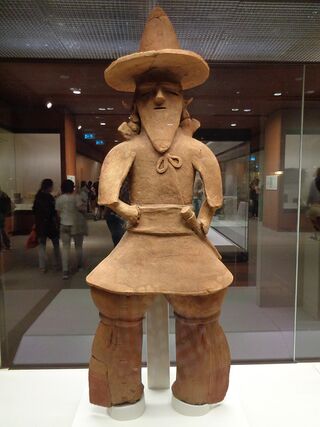 A haniwa figure of a chieftain excavated in Ibaraki prefecture, and on display at the British Museum

Haniwa are terracotta figures which were arranged atop kofun tomb mounds in Kofun period Japan. While the term most literally refers to clay circles or cylinders, haniwa also include humanoid figures, horses, and architectural structures. Haniwa are believed to have performed some kind of spiritual protective function, or perhaps to have simply served as ornamentation, signalling the wealth or power of the occupant of the tomb. Unlike bronze mirrors, magatama beads, weapons, horse equipment, and other burial goods buried inside the tomb, haniwa were placed atop the mound.

Some have suggested that the haniwa were meant to represent scenes from the life of the person entombed, and that the simplified features of the figures were intentionally exaggerated in order to make them more visible from a distance.[1]