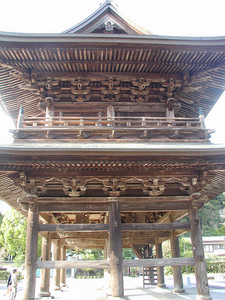 Kenchô-ji is a Rinzai Zen temple in Kamakura, the first temple in Japan to be founded as a Zen temple[1]. Kenchô-ji is counted as number one among the Kamakura Gosan (the five top Zen temples in the city).

It was founded in 1253, when Hôjô Tokiyori invited the Chinese (Song) monk Lanxi Daolong (J: Rankei Dôryû) to found it. Daolong would be the first to be named a Japanese Zen master by a Japanese Emperor.

It was originally built in the form of Chinese Ch'an temples, with seven buildings at the center, including a hattô (Hall of the Law), butsuden (Buddha Hall), and sanmon and sômon gates. At its height, the temple featured 49 tatchû (sub-temples within the same compound). Though most burned down over the course of the 14th-15th centuries, a lot was rebuilt in the early Edo period, under the guidance of Takuan Sôhô. A Shintô shrine located in the hills directly above the temple serves as the chinju guardian shrine for the temple; chiefly associated with Hansôbô gongen, a deified tengu, the shrine contains includes numerous statues of tengu, scattered across a small section of the hill.

Seven Chinese junipers which stand in the compound, noted as famous historical landmarks, are said to have been planted during the temple's founding, making them over 750 years old. The temple's garden is said to have been designed by Musô Soseki, and a dragon painting on the ceiling of the hattô (lecture hall) was created by Nihonga painter Koizumi Junsaku in 2000, in honor of the then-upcoming 750th anniversary of the temple's founding.

The temple's bell, cast in 1255, has been designated a National Treasure, while the main gate to the temple, built in 1754, is known as the Tanuki-mon ("badger gate") on account of a legend involving a tanuki who transformed himself into a monk and worked to raise money for the gate, in order to repay the monks' kindness to him.