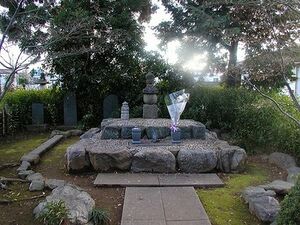 Kawagoe Tarô Shigeyori was lord of Kawagoe in the mid-to-late 12th century, and the most powerful lord in Musashi province[1]. He was father-in-law and a close advisor to Minamoto no Yoshitsune, but lost his head and his land to the forces of rival brother Minamoto no Yoritomo shortly after the latter became shogun in 1185.

Shigeyori was the grandson of Chichibu Shigetaka, founder of the Kawagoe family; his father was Kawagoe Yoshitaka. He was thus related to the Taira clan, but was convinced by Yoritomo to switch sides[2]. Thus, he became tied to the Minamoto clan through marriage to Yoritomo's wet nurse, with whom he had a daughter, Hiki Senni, who in turn later married Yoshitsune.

Shigeyori appears briefly in the famous and popular kabuki play "Yoshitsune Senbon Zakura" as an advisor to Yoritomo; he is approached by Yoshitsune, who explains to him the falling out that occurred between the two brothers, and confides in him that several Taira generals who he claimed to have killed were actually still at large and that he intended to seek them out and kill them. (This is one of the key points in which the play diverges from history; in reality, these generals were already dead.)

In addition to the daughter who was married to Yoshitsune, Shigeyori had three sons - Kawagoe Shigefusa, Shigetoki, and Shigekazu[1].

A stupa marking what is said to be his grave stands on the temple grounds of Yôjuin, in Kawagoe.