From SamuraiWiki
(Redirected from Kawa gozabune)
Jump to navigationJump to search 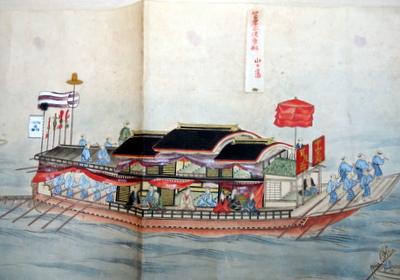 Members of a Ryukyuan embassy to Edo aboard the gozabune of the lord of Chôshû domain, as seen in a 1710 handscroll, Chûzan-ô raichô zu.

Gozabune (lit. "honorable seat ship") were luxurious ocean-going or river boats employed by daimyô on the maritime or river portions of their sankin kôtai journeys, or on other journeys and special occasions. In structure and design, they were typically modified versions of the sekibune used by daimyô in the Sengoku period.[1] Often lavishly decorated in lacquer, gold ornamentation, or other elements, these large ships served as displays of the lord's power, wealth, and cultivation. They were distinguished by the presence of a goza (lit. "honorable seat"), sometimes known as a yakata (lit. "mansion"), a rectangular structure which sat above the deck and replicated the audience chambers of a castle or mansion, such that a lord on his ship could still receive retainers or guests in a tatami-floored space with gold-foil-backed wall paintings; further, the "upper" portion of this chamber, where the lord sat, was typically elevated slightly above the remaining sections, such that the lord literally sat above his retainers or guests. Most domains retained designated families of shipwrights (goyô shônin) to build and maintain their vessels.

The Naminashi Maru, the personal vessel of the Hosokawa clan lords of Kumamoto han, was one such ship, typically used by the Hosokawa lord to travel between Tsurusaki (on the east coast of Kyushu) and Osaka, before traveling the remainder of the way to Edo overland. Some eighteen meters long and six or seven meters wide, it was elaborately decorated in red lacquer and gold ornamentation all along its length. The goza/yakata section of the ship survives today and has been designated an Important Cultural Property. Typically on display within Kumamoto castle, it is perhaps the only such goza/yakata to survive.[2]

Like many gozabune, the Naminashi Maru was reconstructed several times over the course of the Edo period. Originally built in 1624, it was rebuilt six times, and it was from this sixth incarnation, built in 1839, that the goza/yakata survives.[2] The Komate Maru, the personal vessel of the Katô clan lords of Ôzu han (in Iyo province), was similarly rebuilt some nine times over the course of the period. First built in 1616, it was used by the Katô to sail between Nagahama (in Iyo) and Murotsu (near Kobe). It boasted some 56 oars.[3]

The Date clan of Uwajima han named their gozabune the Ôhô Maru ("Great Phoenix"). Lacquered in vermillion from end to end and decorated with numerous gold ornaments, it boasted 68 oars, and was 500 koku in size.[4] The gozabune of the Matsudaira clan lord of Takamatsu han, named Hiryû Maru ("Flying Dragon") was of similar size. Thirty-two meters in length, it was also considered a 500 koku vessel. It had 52 oars, and sails made from 18 tan of fabric. It was made entirely of white wood, giving it a simple, clean, look, but was ornamented with numerous mitsuba-aoi (triple hollyhock) family crests (kamon) in gold. Originally built in 1669, the Hiryû Maru was reconstructed in 1751 and again in 1789.[5]

Many domains typically had a particular harbor, and particular places within that harbor, where such ships were kept when not in use. Further, the domain's ships were often organized in a hierarchy, with a particular ship being the most important or highest-ranking, another particular ship being second, and so forth. During sankin kôtai journeys, these gozabune were stocked up only with military materiel, and other goods needed for immediate use aboard ship; all other luggage being brought by the lord to Edo was transported on other, smaller, boats. In the case of Ôzu han, these included three 300-koku vessels, some of which were hired or rented from Osaka-based merchants, who were then paid in rice upon the mission's arrival in Osaka. Villagers from within the domain were obliged to contribute boats or boatmen as well, but many domains paid such villagers some small amount to compensate them for contributions beyond the domain's territory (or, in this case, waters).[6]

When Ryukyuan and Korean embassies to Edo traveled up the Yodo River from Osaka to Fushimi, on their way to Edo (or, back down, on the return journey), kawa gozabune - the riverine versions of these ocean-going luxury vessels - were commissioned from various daimyô of western Honshû and Kyushu to carry the foreign envoys.