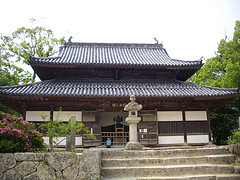 One of the chief prayer halls at Kanzeon-ji.

Kanzeon-ji is a Buddhist temple in Dazaifu (Fukuoka Prefecture) which was once the most important temple on Kyûshû. It is located just east of the site of the Dazaifu government offices. The temple was also called "fu no daiji" (Great Temple of Dazaifu).

It was built upon the orders of Emperor Tenchi, as a memorial to his mother, Empress Saimei, who died in 661 in the Asakura Tachibana Palace (in what is today Asakura District, Fukuoka Prefecture) while leading military preparations to aid the Korean kingdom of Paekche in regaining territory lost to the kingdom of Silla.

The temple was completed in 746, 85 years later. At its height, Kanzeon-ji was the chief temple in Kyushu. An ordination platform was established at Kanzeon-ji in 761, making the temple the site of one of three top ordination platforms in the country, along with Tôdaiji in Nara, and Yakushi-ji in Shimotsuke province.

In the temple's grounds, seven halls stand today. Many of the buildings were lost over the centuries to fire and typhoon; the kondô and kôdô which stand today date to the Edo period, when they were rebuilt by the Kuroda clan daimyô of Fukuoka. These are prefecturally designated Cultural Properties. The temple is also famous for its bell, a National Treasure, and one of the oldest temple bells in Japan.

The temple's storehouse holds a number of Buddhist sculptures of significance, some quite large. One sculpture of Daikokuten, dating to the 12th century, is one of the oldest extant in the country, and depicts him as a far thinner, less round figure than how he is commonly seen today. Two statues of Kannon, standing over 5 meters tall, date to 1069 and to the 12th century; a third Kannon figure on that scale dates to 1222 and is a reproduction of an 8th century original.