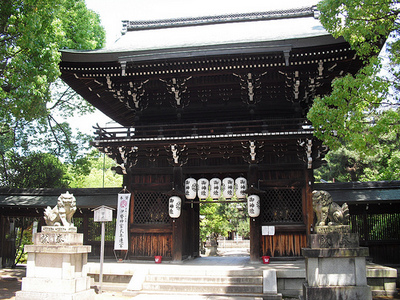 The main gate to Kami-goryô Shrine.

Kami-goryô Shrine is a Shinto shrine in Kyoto famous as the site where the Ônin War is said to have begun. Kami-goryô enshrines thirteen kami, including Prince Sawara (Emperor Sudô), Kibi Makibi, and Tachibana no Hayanari.

The site of the shrine was previously the location of a temple called Kami-Izumo-dera. After Heian-kyô (Kyoto) became the Imperial capital in 794, Emperor Kammu ordered the foundation of a shrine on the site, dedicated to the spirits of eight figures who had died in unfortunate circumstances, who would then serve as guardian spirits for the new capital. Five more were added upon the orders of Emperor Meiji in the late 19th or early 20th century. The shrine gradually grew in popularity and importance, both among the peasantry and the Imperial family, particularly in the Heian period, as a site for praying for the protection of the Imperial Palace and for the banishment of evil spirits which threatened the capital.

On 1467/1/18, a battle broke out at, or just outside, the shrine, between Hatakeyama Masanaga and Hatakeyama Yoshinari, over the position of kanrei. This is said to mark the beginning of the Ônin War, which raged for ten years, devastating Kyoto and leading into the 130-year period of nationwide civil war known as the Sengoku period.