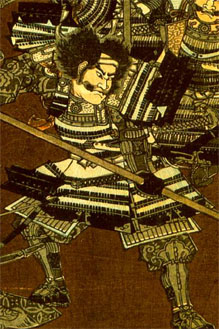 Kakizaki Kageie was one of Uesugi Kenshin's most famous generals, and earned a reputation for ferocity on the battlefield. He joined Kenshin early in the latter's drive to unite Echigo in the 1540's and early 1550's, and was given the title Izumi no kami. He was present for at least three of the Battles at Kawanakajima with Takeda Shingen. In the Fourth of those contests, in 1561, he led the vanguard in a charge on the Takeda lines and clashed with troops under Takeda Nobushige (Shingen's younger brother). In the course of the fighting, Nobushige was killed and the Uesugi came close to scoring a decisive victory. Kageie afterwards served Kenshin battles against the Hôjô and Ashina, but later became suspected of treason. For reasons that are unclear, Kenshin came to suspect Kageie of plotting with Oda Nobunaga against him and so rashly ordered his execution. Kenshin later regretted his decision, and not long before his own death from illness, he claimed to have been visited by Kakizaki's angry ghost.