Uesugi Kenshin drew the Takeda to battle by threatening Kaizu castle. Shingen led an army of around 20,000 men to the area, making a wide circle around Kenshin's camp on Saijo mountain and entering Kaizu. Shingen then decided to adopt a plan conceived by Yamamoto Kansuke whereby one part of the Takeda army would set up an ambush on Kawanakajima while the other part flushed Kenshin from Saijo in a night action. Shingen accordingly took 8,000 men to Kawanakajima while Kosaka Masanobu and Baba Nobufusa led 12,000 to Saijo; unfortunatly for the Takeda, Kenshin learned of Shingen's movements and acted to thwart his plans. He took his own army off Saijo ahead of Kosaka and Baba and assaulted Shingen's force at dawn. The fighting was desperate, and Shingen's brother Nobushige and great-uncle Morozumi Masakiyo were both killed. Kansuke fought bravely, then commited suicide even as Kosaka and Baba arrived to drive Kenshin off. The battle is recorded as having been especially bloody, and supposedly featured a brief personal combat between Kenshin and Shingen - though this may be regarded as a colorful legend (see Arakawa Nagazane). 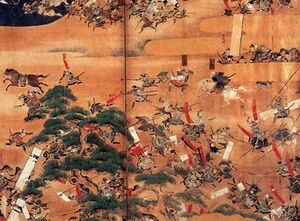