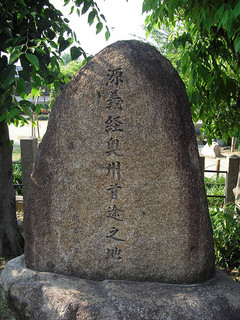 Kadode Hachimangû is a Shinto shrine in Kyoto dedicated to Hachiman, patron god of the Minamoto clan, as well as to the spirits of Empress Jingû, Emperor Ôjin, and Hime-ô-kami.

The shrine was originally called Uchino Hachimangû, and was founded by inviting the Hachiman deity from Usa Hachimangû in Kyushu. It was among a number of shrines dedicated to the protection of the Imperial capital, and was later moved to its current location, the site of the residence of Kaneuri Kichiji, a gold merchant involved in trade with Ôshû (the far north; the Tôhoku region).

Kadode, normally written as 門出, is a term which sometimes comes up in classical literature. It refers to a practice common in the Heian period by which people, when leaving on a great journey, would stop first and stay for a period somewhere else, and would then make their true departure from there, and not directly therefore from their own residence. The shrine takes its name from Minamoto no Yoshitsune having performed this custom at this shrine on 1174/3/3 before departing for Hiraizumi shortly afterwards. Though he would seek refuge in Ôshû again after the Genpei War (c. 1185-1189), when he was being pursued by the forces of his brother, the Shogun Yoritomo, Yoshitsune's stay at this shrine occurred earlier, in 1174, when he was still being hidden and protected from the Taira clan, who were then in power, and who had spared his life at the end of the Heiji Rebellion.