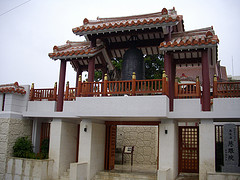 The temple gate and belltower. 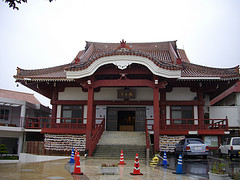 Jigen-in, also known as the Shuri Kannon-dô, is a Rinzai Zen temple located at the end of Aijô-ufumichi, the main road leading out of Shuri castle.

Long a site for prayers for safe journeys, those traveling to Japan on the Edo nobori missions typically prayed here first for a safe journey, prior to their departure from Ryûkyû.

The Kannon-dô was established in 1616 as a branch temple of Tenkai-ji, though the Jigen-in was already established previously.

The temple is located on a hill historically known as Banzairei, or "Banzai Peak." It supposedly got that name after an event in which King Shô Shin visited the site, and was greeted with loud cheers of "Banzai!" (roughly, "may the king live 10,000 years!"). The hill was long considered one of the eight scenic sites of Shuri, and a number of poems were composed about it. A monument was erected on the site in 1497 declaring the significance of the site; though lost in the Battle of Okinawa, along with the temple, the monument has now also been restored.