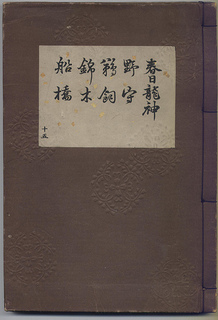 The cover of a Noh utaibon published in Tokyo in 1925, and bound in the traditional yotsume-toji manner.

The term wahon is used to refer to Japanese books bound in a number of different formats, most typically the pouch-sewn form known as fukuro toji or yotsume toji, described below. By contrast, books bound in the Western manner are known as yôsôbon (洋装本).

A copy of the Gosen wakashû imperial poetry collection, inscribed in a handscroll

An orihon (accordion book) of example calligraphy by Ichikawa Beian 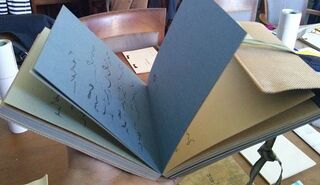 A book bound in the gajôsô (画帖装) or "album binding" mode.

A book bound in the retsujôsô (列帖装) or tetchôsô (綴葉装) manner. Note the multiple packets of pages, bound together with thread.

History and Usage of Binding Types

While each mode of binding certainly waxed and waned over the centuries, few if any ever died out, to be replaced by newer formats. Rather, different formats continued to be used for different purposes; even today, with "modern" Western-style binding dominating, yotsumetoji and other forms of traditionally-bound wahon continue to be produced. One reason older forms are maintained is because particular types of texts are strongly associated with that form, or simply because the older forms feel more traditional, giving the sense of greater historicity, prestige, or sacredness. In some cases, the time period and form in which a given type of text first entered Japan cemented the text's association with that particular format. Scrolls continued to be the dominant form for many Buddhist texts, especially sutras, for hundreds of years, in part because they first entered Japan in this form. By contrast, many Confucian texts, including Neo-Confucian texts first introduced to Japan during the Song dynasty in the form of bound books, continued to be associated with the book format, and to be reproduced in such a format. Scrolls also came to be associated in the Heian period with poetry collections, while books came to be associated with monogatari (tales), personal diaries (nikki), and assorted writings (zuihitsu).

Elements of a Book 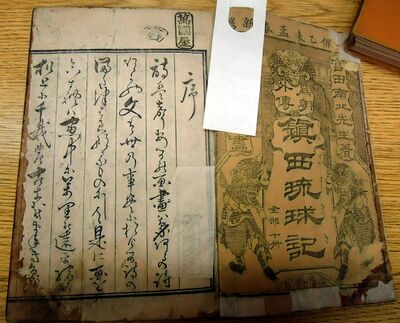 The first opening of Chinzei Ryûkyû-ki, with the inside of the front cover giving the naidai (inside title) - Tametomo gaiden: Chinzei Ryûkyû-ki - along with furigana pronunciation guide, and an indication that the book is complete in ten volumes. The publication date is given along the top, and the author's name (Miyata Nanboku sensei) on the right. The illustrator's name, Okada Gyokuzan, is covered here by a slip of paper. 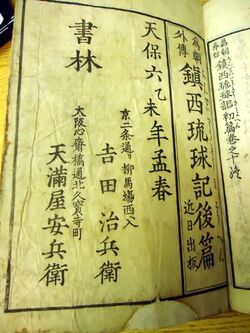 The okutsuke of Chinzei Ryûkyû-ki, showing the title on the far right, the date of the woodblocks being cut (Tenpô 6, or 1835, spring), and the names and addresses of the publishers: Yoshida Jihei in Kyoto, and Tenman'ya Yasubei in Osaka. The black kaisen borders around the printed area are visible here as well.

Medieval books were typically written on such thick paper that there was no need for a separate book cover. Titles were simply written on the "front" of the outermost sheet. However, by the Edo period, there had come to be a demand for formal covers, both for decorative/aesthetic purposes, and also in order to make the book seem like a more precious, and thus prestigious, object. Covers quickly became standard. Still, book covers, particularly on fukurotoji books, were made of simple paper, or paper lining a somewhat thicker piece of card-board made from recycled paper. These outer covers were often burnished with a sizing material called dôsa (礬水), made from alum and hide glue, which provided some protection for the books; covers were also often embossed, printed, painted, or burnished with simple patterns. These patterns were, sometimes, used exclusively by a single publisher, thus marking the book as having been produced by that publishing house. A paper slip known as a gedai (外題, "outside title"), affixed to the front cover, often gives the title of the book, along with other information, such as the volume number within a series.

Not strong enough to stand vertically on a shelf like Western bindings, Japanese books were always meant to be stored horizontally (laid out flat on the shelf), or, in a stiff box called a chitsu (帙), which then served the double purpose of also conveniently collecting multiple volumes together.

The inside of the front cover most often featured the title of the publication, in what is called a naidai (内題, "inside title"), along with the name of the artist(s), author(s), and publisher. This information might, alternatively, be found on the first page of the book.

The title could also often be found on the hashira or hanshin, in an inscription called a gyobi (魚尾, "fishtail"). Though found on the outer edges of each page in a completed book, and potentially difficult to read, these would have been clearly visible in the center of each page as printed, prior to the construction of the book, along with the page number, helping ensure that pages were kept in the correct order, and with the correct publication, during the process of the book's construction. The gyobi is often accompanied by a black box known as a kurokuchi (黒口, "black mouth" or "black box").

The inside back cover of a book often contains a more detailed version of this information. Known as the publisher's colophon (okutsuke 奥付 or kanki 刊記), this generally includes at minimum the date of the carving of the blocks and the name and address of the publisher; note that books were often re-printed and re-issued numerous times, and the date in the okutsuke remains the date that the woodblocks for printing this book were originally carved, and thus does not reflect the actual printing/publication date of that particular volume, which may be a second-, third-, or even fourth-printing. Sometimes multiple publishers are listed; in this case, the last name on the left is typically the hanmoto (板元), or the owner of the woodblocks, and thus owner of the publication rights, so to speak, though concepts of intellectual property and publication rights functioned quite differently at that time. The okutsuke often also included, once again, the names of artists and authors, as well as, sometimes, block carvers or others involved in the production of the work. In many Edo period commercially published books, the last several pages of the volume (before the okutsuke) featured advertisements for other offerings from the same publisher.

Japanese books can often be distinguished from Chinese ones by the presence in Japanese books of kaisen (界線), black borders around the printed portion of the page, leaving an inch or larger margin at the top of the page. This is absent in Chinese books. Meanwhile, Chinese books, as well as Japanese books written to emulate or evoke a Chinese style, employ lined columns within which the characters are written in clean, straight columns; by contrast, wabun texts lack such lines.

An opening from the c. 1850 book Ryûkyû kaigo, with illustrations by Hiroshige depicting a Ryukyuan embassy to Edo. The dimensions and horizontal format are typical of yokohon.

Edo period paper came in several standard sizes; the size of books was, accordingly, standard. Though there are surely exceptions, larger books generally contained more formal, serious, material, while smaller books were less formal and less serious. For example, many manuscript copies of scholarly texts are found in the Ôbon size, while satirical novels were often produced in smaller sizes.

Binding Styles in the Meiji Period

In 1868, according to some sources, 100% of books produced in Japan were still wasôbon - that is, books bound in traditional Japanese bookbinding styles. Books on science, engineering, and similar subjects began to be published as yôsôbon (books bound in Western modes) early in the Meiji period, and by 1880, the majority of books on these subjects were bound in a Western manner. However, religious books, and those of certain other types, continued to be published as Japanese-style books for quite some time; as late as 1905, 44% of religious books were still wasôbon. It was not until 1886 that yôsôbon began to dominate, and in 1895, roughly 1/5th of the books published in Japan were still being bound in traditional styles. In fact, certain publishing niches related to the traditional arts, such as practice books (utaibon) for the Noh theatre, are still published as wasôbon today.[2]